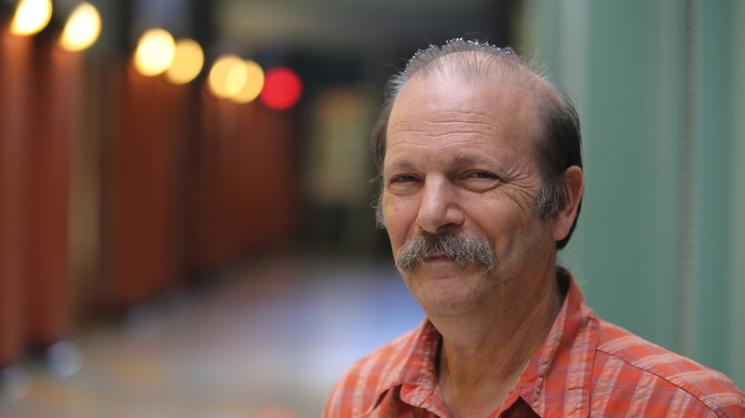 Rice University computer scientist Moshe Vardi is stepping up his game. After years of speaking out about the unintended ills of technology, he is marshaling support to directly address them through a campuswide Initiative on Technology, Culture and Society.

Before a standing room only crowd, Rice Provost Marie Lynn Miranda announced the initiative in her introduction to Vardi’s Jan. 22 University Professor lecture, saying the goal “is to create a permanent intellectual and multidisciplinary locus of activities at Rice dedicated to the descriptive and prescriptive study of a socio-technical system — namely, how technology impacts society and culture, and how society responds to those impacts.”

The initiative will involve education, outreach, research and scholarship, and Miranda credited Vardi’s tireless efforts to meet with faculty and build broad support for the program. “I think all of you would agree that Moshe is persistent,” she said. “And one of my favorite things about him is that he is persistent in calling the university to be better.”

Vardi recently met with Rice News to talk about the initiative.

Q: Technology, culture and society covers a lot of ground. What’s the focus?

We live in a technology-driven society, but technology — and not just information technology, but any technology — has consequences. The benefits almost always come with societal costs. And society needs to get smart and find a way maximize the benefits and minimize the costs. Just as doctors would try to do when they give a medication that has adverse side effects.

We are already suffering from the consequences of technology because we have not paid attention to the costs in advance. We said, “Let’s deploy them.”

Automobiles? Fantastic. So convenient. I can go wherever I want. And then we say, “Oops. What about pollution? What about CO2 (carbon dioxide)?” We’ve dealt with some aspects of pollution through public policy. You can see from pictures in the 1960s of what the air looked like over some major cities. Now the air looks good. But CO2 is invisible. We don’t quite see it, and now we are learning that we have to deal with that.

Q: Where do you start?

Step one is admitting that you have a problem. I think it’s important. And look, I am a computer scientist. I have spent my life developing theory, principles and tools, and also working with industry. And I always thought, “I am a good person. I make the world a better place by increasing knowledge.” It’s a shock to realize that your knowledge is a two-edged sword, that it can be used for the positive, for good, or it can be used for bad.

Other disciplines had this moment of truth earlier. The physicists had it after the atomic bomb. And we know there are always malevolent people in the world. They can use technology just as the good people can use it. But that isn’t what I’m talking about. The shock is when you think you are doing something for good — “We’ll have social media. Everybody will be able to talk. We’ll be able to share inforLogo for Initiative on Technology, Culture and SocietyLong Descriptionmation freely” — and suddenly you realize that there are all kinds of negative effects from that. Fake news. Fake entities. Trolling.

Q: If step one is admitting there’s a problem, is the solution to stop using technology?

History has shown that human civilizations have never been able to stop technological advancement. Instead, societies learn to deal with the adverse consequences. In a sense, this is the story of humanity. We are the technological species. Our quest to invent tools is partly where we departed from our cousins, the apes. And dealing with the consequences of technology has always been part of that quest.

We discovered fire about 1 million years ago, perhaps the most crucial discovery to early human progress. But fire also has enormous power to destroy. One of humanity’s oldest recorded stories is the Greek myth about Prometheus stealing fire from the gods and giving it to humans. And the gods’ revenge was sending us Pandora, who came with a box that looked like a gift but which instead held pestilence and all kinds of troubles. They were telling us, “Technology comes with adverse effects,” and in fact fire still kills people every day. We are still dealing with its consequences.

Q: How will Rice’s Initiative on Technology, Culture and Society make a difference?

The advisory board (see below) and I decided on three legs. One is research and scholarship. We will look at various aspects and facets of how technology impacts society and culture. And if the impacts are negative, we’ll work with both the Baker Institute and the Kinder Institute to examine policies that can address them.

Another leg is outreach. This has to be a major topic of conversation in universities and in society. We want to elevate the conversation. We’re discussing a large conference on technology, culture and society in 2020. Another example would be smaller conferences that focus on narrower topics. For example, I’m working with the Kinder Institute to explore the idea of a possible meeting about technology and urban economic development, because partly what we are seeing now — and technology plays a key role — is that only certain areas of the country are booming. Most of the big cities are booming. But the countryside is declining. You want to understand politics? This is what’s happening politically today. The blue states are generally doing very well economically, and the red states are in decline. And technology is a driving force in that change.

The final leg is education. We are already teaching a course in computer science on computing, ethics and society, and we’ve decided to develop a broader course next year. I’m not sure how it will be listed, but we want to attract students from all majors and disciplines. With CS students, we are taking a very specific approach. We are saying, “You guys are going to be the technology producers, so here is what you need to know about the social and societal consequences of this technology.” This will be different when we’re talking to a broader population of students. That’s more a case of raising awareness that technology is a potent, driving force in society. How is life today different than life was 50 years ago? It’s because of technology. That’s what has changed in how we live our lives day to day. And that will be the case throughout the lives of these students. I think it’s part of our obligation, as a university, to say, “This is one of the most important societal issues of your time, and as a citizen you are going to have a say in deciding how the country deals with it.”

Q: Where can we learn more?

We’re still in the early stages. A website is one of our priorities, and we expect to have one soon. People will be able to find it from the Kennedy Institute homepage.