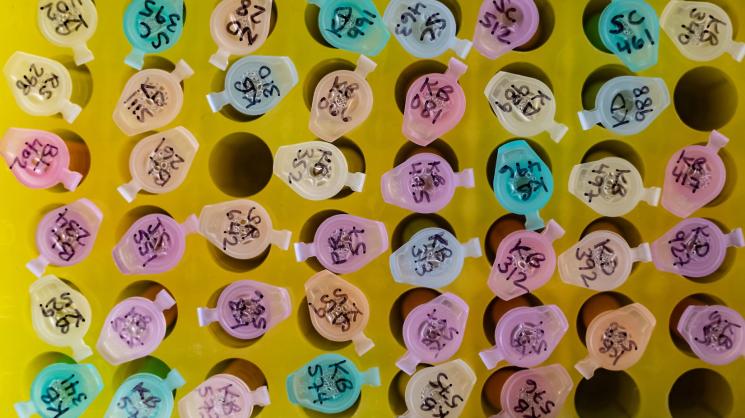 Rice University synthetic biologists have hacked bacterial sensing with a plug-and-play system that could be used to mix-and-match tens of thousands of sensory inputs and genetic outputs. The technology has wide-ranging implications for medical diagnostics, the study of deadly pathogens, environmental monitoring and more.

Rice University synthetic biologists have hacked bacterial sensing with a plug-and-play system that could be used to mix-and-match tens of thousands of sensory inputs and genetic outputs. Those involved with the years-long project include (from left) Sebastian Schmidl, Jeff Tabor, Karl Gerhardt and Felix Ekness. (Photo by Jeff Fitlow/Rice University)

In a project spanning almost six years, Rice bioengineer Jeff Tabor and colleagues conducted thousands of experiments to show they could systematically rewire two-component systems, the genetic circuits bacteria use to sense their surroundings and listen to their neighbors. Their work appears in a study published this week in Nature Chemical Biology.

Tabor’s group rewired the outputs of known bacterial sensors and also moved sensors between distantly related bacteria. Most importantly, they showed they could identify the function of an unknown sensor.

“Based on genomic analyses, we know there are at least 25,000 two-component systems in bacteria,” said Tabor, associate professor of bioengineering at Rice’s Brown School of Engineering and the lead scientist on the project. “However, for about 99% of them, we have no idea what they sense or what genes they activate in response.”

The importance of a new tool that unlocks two-component systems is underscored by the 2018 discovery of two strains of a deadly, multidrug-resistant bacterium that uses an unknown two-component system to evade colistin, an antibiotic of last resort. But Tabor said the possible uses of the tool extend beyond medicine.

“This is nature’s greatest treasure trove of biosensors,” he said. “Based on the exquisite specificity and sensitivity of some of the two-component systems we do understand, it’s widely believed bacterial sensors will outperform anything humans can make with today’s best technology.”

Tabor said that is because bacterial sensors have been honed and refined through billions of years of evolution.

“Bacteria don’t have anything nearly as sophisticated as eyes, ears or a nose, but they travel between very different environments — like a leaf or an intestine or the soil — and their survival depends on their ability to sense and adapt to those changes,” he said.

“Two-component systems are how they do that,” Tabor said. “These are the systems they use to “see” light, “smell” the chemicals around them and “hear” the latest community news, which comes in the form of biochemical tweets broadcast by their neighbors.”

Bacteria are the most abundant form of life, and two-component systems have shown up in virtually every bacterial genome that has been sequenced. Most species have about two dozen of the sensors and some have several hundred.

There are more than half a dozen broad categories of two-component systems, but all of them work in a similar way. They have a sensor kinase (SK) component that “listens” for a signal from the outside world, and upon “hearing” it, initiates a process called phosphorylation. That activates the second component, a response regulator (RR) that acts upon a specific gene — turning it on or off like a switch or up or down like a dial.

To discover the function of a totally new two-component system, Rice University synthetic biologists re-wired the genetic circuitry in seven strains of bacteria and examined how each behaved when exposed to 117 individual chemicals. (Photo by Jeff Fitlow/Rice University)

While the genetic code for the components is easily spotted on a genomic scan, the dual mystery makes it almost impossible for biologists to determine what a two-component system does.

“If you don’t know the signal that it senses and you don’t know the gene that it acts on, it’s really hard,” Tabor said. “We know either the input or the output of about 1% of two-component systems, and we know both the inputs and outputs for fewer still.”

Scientists do know that SK’s are typically transmembrane proteins, with a sensing domain, a kind of biochemical antenna, that pokes through the bacteria’s saclike outer membrane. Each sensor domain is designed to latch onto a specific signal molecule, or ligand. Each SK has its own target ligand, and binding with the ligand is what starts the chain reaction that turn a gene on, off, up or down.

Importantly, though every two-component system is optimized for a specific ligand, their SK and RR components work in similar ways. With that in mind, Tabor and study co-lead author Sebastian Schmidl decided in late 2013 to try swapping the DNA-binding domain, the part of the response regulator that recognizes DNA and activates the pathway’s target gene.

“If you look at previous structural studies, the DNA-binding domain often looks like cargo that’s just hitching a ride from the phosphorylation domain,” Tabor said. “Because of that, we thought DNA-binding domains might function like interchangeable modules, or Lego blocks.”

Jeff Tabor is an Associate Professor of Bioengineering and of Biosciences at Rice University. (Credit: Jeff Fitlow/Rice University)

To test the idea, Schmidl, then a DFG Postdoctoral Fellow in Tabor’s group, rewired the components of two light sensors Tabor’s team had previously developed, one that responded to red light and other that responded to green. Schmidl rewired the input of the red-light sensor to the output of the green-light sensor at 39 different locations between the phosphorylation and DNA-binding domains. To see if any of the 39 splices worked, he stimulated them with red light and looked for a green-light response.

“Ten of them worked on the first try, and there was an optimum, a specific location where the splice really seemed to work well,” Tabor said.

In fact, the test worked so well that he and Schmidl thought they might have simply gotten lucky and spliced together two unusually well-matched pathways. So they repeated the test, first attaching four additional DNA-binding domains to the same response regulator and later attaching five DNA-binding domains to the same sensor pathway. Most of those rewirings worked as well, indicating the approach was far more modular than any previously published approaches.

Schmidl, now an assistant professor of biology at the Texas A&M University System’s RELLIS campus in Bryan, left Rice in 2016. Co-lead author Felix Ekness, a Ph.D. student in Rice’s Systems, Synthetic and Physical Biology (SSPB) program, then took up the project, engineering dozens of new chimeras and conducting hundreds more experiments to show the method could be used to mix and match DNA-binding domains between different species of bacteria and between different families of two-component systems.

Tabor knew a top-flight journal would require a demonstration of how the technology could be used, and discovering the function of a totally new two-component system was the ultimate test. For this, postdoctoral fellow Kristina Daeffler and SSPB Ph.D. student Kathryn Brink transplanted seven different unknown two-component systems from the bacterium Shewanella oneidensis into E. coli. They engineered a new E. coli strain for each unknown sensor, and used DNA-binding domain swapping to link all their activities to the expression of green fluorescent protein.

While they didn’t know the input for any of the seven, they did know that S. oneidensis was discovered in a lake in upstate New York. Based on that, they chose 117 different chemicals that S. oneidensis might benefit from sensing. Because each chemical had to be tested one-on-one with each mutant and a control group, Brink had to perform and replicate almost 1,000 separate experiments. The effort paid off when she discovered that one of the sensors was detecting changes in pH.

A genomic search for the newly identified sensor underscored the importance of having a tool to unlock two-component systems: The pH sensor turned up in several bacteria, including the pathogen that causes bubonic plague.

“This highlights how unlocking the mechanism of two-component systems could help us better understand and hopefully better treat disease as well,” Tabor said.

Where is Tabor taking the technology next?

He’s using it to mine the genomes of human gut bacteria for novel sensors of diseases including inflammatory bowel disease and cancer, with the goal of engineering a new generation of smart probiotics that can diagnose and treat these diseases.

The research was supported by the National Science Foundation, the Office of Naval Research and the Welch Foundation.