Super-Size It: Regional Flood Alert System for Houston Based on High Performance Computing (Part 1 of 2) 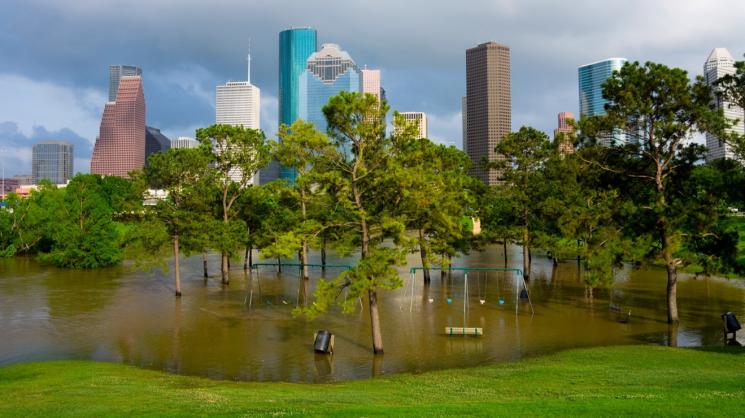 Ongoing hydrology research at Rice University has the potential to increase Houston’s flood resilience with the use of high-performance computing (HPC). The research addresses inland flooding with a flood alert system that analyzes a small Houston watershed. If combined with HPC, the flood alert system could be scaled to the city or county level to provide critical flood alerts for millions of people. The research increases our knowledge of Houston area hydrologic systems, which is vital to making Houston more resilient.

Over the last 20 years, Dr. Bedient has developed a Flood Alert System for the Texas Medical Center (TMC). The current version of the Flood Alert System, FAS4, uses real-time radar-rainfall data, rain-gauge data, hydrologic and hydraulic modeling, and bayou cameras to predict flood conditions and timing. When and where peak flow will occur is the foundation of a flood alert system—an hour’s warning provides enough time to move people and property to safety and makes a big difference for homeowners, businesses, and institutions.

FAS4 uses real-time rainfall data collected from the National Weather Service’s NEXRAD radar, which is automatically processed and adjusted based on about 20 rain gauges on the ground in the Brays Bayou watershed. During a storm, the adjusted rainfall data is sent every five minutes to the FAS4 server hosted at Rice’s Primary Data Center. FAS4 then predicts peak flow levels on Brays Bayou using HEC-1, a distributed, physics-based hydrologic model.

Embedded in FAS4 is a library of about 75 pre-computed flood-plain or inundation maps that correspond to different rainfall scenarios in the Brays Bayou watershed. Collectively referred to as a Flood Plain Map Library, the maps were developed using the hydraulic model HEC-RAS that predicts how deep and how wide a flood will be. With its GIS mapping application RAS Mapper, HEC-RAS can map the boundaries of inundation. Today FAS4 uses these pre-computed inundation maps because, when the system was developed, there was no way to do the hydraulic modeling real-time during a flood event to create an inundation map. Creating the Flood Plain Map Library solved that problem by developing pre-computed inundation maps for many different storm scenarios.

Using the real-time radar rainfall and the predicted peak flows from HEC-1, the system selects a pre-computed inundation map that corresponds to the storm’s rainfall and then updates the map selection process hourly during a storm. A stream flow gauge and infrared cameras on Brays Bayou provide visual confirmation of the model’s output. Water levels are automatically communicated to TMC, which uses a message board to notify thousands of employees who may move cars from basement garages, close water-tight doors on tunnels connecting the buildings, or raise flood gates. In addition, the public can access the inundation maps by simply going to the FAS website

Bedient says FAS4 is “old technology” that was built for only one watershed. But FAS4 works well and it could be used as a prototype for the City of Houston or Harris County to develop a county-wide flood alert system that would leverage HPC and Big Data. A city- or county-wide flood alert system, operating real-time on a supercomputer during a flood, would not only allowed more accurate fine-grained updates, but would arm many more people with reliable just-in-time environmental intelligence and enable them to make informed decisions about their safety.

Scaling the system to county-wide would be a big undertaking. Brays Bayou is one watershed covering 129 square miles; Harris County has 22 watersheds covering about 2,500 square miles. Each watershed would require individual modeling. Enlarging the FAS4 to a county-wide alert system would likely require two phases. “Phase 1 is 500 maps,” says Bedient, referring to the pre-computed inundation maps for all 22 of the county’s watersheds. In Phase 2, the system would run real-time during a flood event on a supercomputer to provide just-in-time advice and alerts.

During Phase 1, the modeling for the 22 individual flood alert systems would have to be connected to create one big flood alert system. This modeled connection is important because the bayous in Harris County are hydrologically connected. For example, White Oak and Brays Bayou converge with Buffalo Bayou near downtown Houston. Simply running 22 flood alert systems on separate computers wouldn’t account for these hydrological connections. Incorporating modeling about management choices made by the US Army Corps of Engineers for the area’s two flood control reservoirs would add another layer of complexity to a county-wide system.

Another benefit of modeling the 22 watersheds together on a supercomputer is that the modeling would significantly increase our knowledge of how flooding really happens in the Houston area; that is, how inland floodwaters behave as they flow generally southeast across the county, from less developed land into highly developed land and finally into Galveston Bay. Modeling the entire county during a storm in real-time on a supercomputer would vastly increase our understanding of how this complex hydrological event happens. HPC provides better spatial information and faster computing runs that would improve our knowledge of flooding processes and give the public faster and better information during a flood.