Stalled weather patterns will get bigger due to climate change 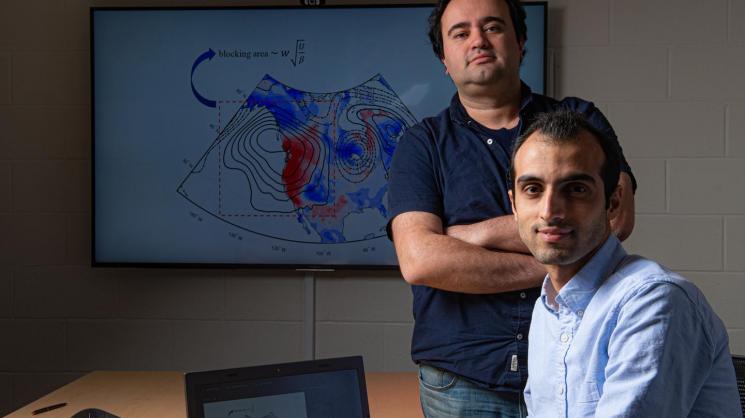 HOUSTON (November 13, 2019) - Climate change will increase the size of stalled high-pressure weather systems called "blocking events" that have already produced some of the 21st century's deadliest heat waves, according to a Rice University study.

Using data from two sets of comprehensive climate model simulations, Rice fluid dynamicists Ebrahim Nabizadeh and Pedram Hassanzadeh, and colleagues found that the area of blocking events in the northern hemisphere will increase by as much as 17% due to anthropogenic climate change. The study, which is available online from Geophysical Research Letters, was co-authored by Da Yang of Lawrence Berkeley National Laboratory and the University of California, Davis, and Elizabeth Barnes of Colorado State University.

Hassanzadeh, an assistant professor of mechanical engineering and of Earth, environmental and planetary sciences, uses computational, mathematical and statistical models to study atmospheric flows related to a broad range of problems from extreme weather events to wind energy. He said researchers have increasingly been interested in learning how climate change might affect blocking events, but most studies have focused on whether blocking events will become more frequent as the atmosphere warms because of greenhouse gas emissions.

"Studies in the past have looked at whether you get more or less blocking events with climate change," he said. "The question nobody had asked is whether the size of these events will change or not. And the size is very important because the blocking events are more impactful when they are larger. For example, if the high-pressure system becomes bigger, you are going to get bigger heat waves that affect more people, and you are likely going to get stronger heat waves."

Nabizadeh, a mechanical engineering graduate student in Rice's Brown School of Engineering, set out to answer the question two years ago. Using a hierarchical modeling approach, he began with experiments on a model of atmospheric turbulence that's far simpler than the real atmosphere.

The simple model, which captures the fundamental dynamics of blocking events, allowed Nabizadeh to do a great deal of exploration. Making slight changes in one parameter or another, he ran thousands of simulations. Then the data was analyzed using a powerful dimensional analysis technique called the Buckingham-Pi theorem, which is often used in designing large and complex engineering systems that involve fluid flows.

The goal was finding a scaling law, a mathematical formula that described the size of a blocking event using variables that climate scientists already study and understand. Nabizadeh started with scaling laws that have been developed to predict the size of day-to-day weather patterns, but he found that none of the variables were predictive for blocking events.

His persistence eventually paid off with a simple formula that relates the area of blocking events to the width, latitude and strength of the jet stream, all of which are well-studied and measured.

"I gave a talk about this recently, and one of the people came up after and said, 'This is magical, that these powers add up and suddenly you get the right answer.' But it took a lot of work by Ebrahim to get this elegantly simple result," he said.

At a one point, Nabizadeh had analyzed the data from many simulations and produced a comparison that included page upon page of figures, and Hassanzadeh said the scaling law discovery was encouraged by an unlikely source: the line at the driver's license office.

Hassanzadeh and Nabizadeh got their licenses about a week apart, and they had ample time to study results while they waited. "You have to sit and you don't have anything to do," Hassanzadeh said. "So after staring at these numbers for hours, we realized this is the right scaling."

They also compared the simple-model results with the output of increasingly complex models of the Earth's weather and climate. Nabizadeh said the scaling law predicted changes in the size of future winter blocking events in comprehensive climate model simulations with remarkable accuracy.

"It performs better for winter events than summer events for reasons we don't yet understand," Nabizadeh said. "Our results suggest future studies should focus on better understanding summer blocks and also how larger blocking events might affect the size, magnitude and persistence of extreme-weather events like heat waves."