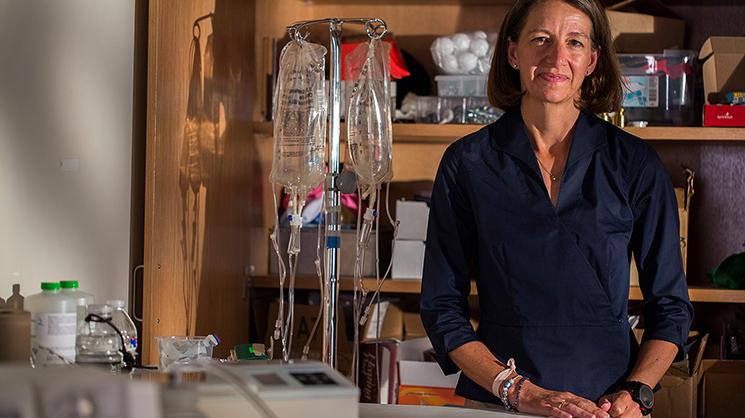 Rebecca Richards-Kortum, a Rice University bioengineering professor whose work has improved medical care for millions of newborn babies and saved lives in low-income countries, was recognized on the floor of the U.S. House of Representatives May 1 for her recent induction into the National Inventors Hall of Fame.

Richards-Kortum, the Malcolm Gillis University Professor, professor of bioengineering, director of the Rice 360º Institute for Global Health and a U.S. science envoy for health security, develops inexpensive but effective medical technologies for people living in places where traditional medical equipment is not an option. She has pioneered the development of low-cost inventions that detect cancer and help newborns survive in Africa.

“Mr. Speaker, I rise today to congratulate Dr. Rebecca Richards-Kortum of Rice University in Houston and Dr. James Truchard and Jeff Kodosky of National Instruments in Austin for their induction into the National Inventors Hall of Fame on May 2, 2019.

“Dr. Rebecca Richards-Kortum is the first woman and the youngest Rice faculty member to earn the rank of University Professor. Early in her career, as a biomedical engineering professor at the University of Texas at Austin, she learned that early screening programs for cancer were out of reach for many and began creating a low-cost imaging system to detect precancerous cells. This technology was further developed to detect oral cancer. Studies later showed that her system could improve early detection of cancer while drastically reducing costly and unnecessary biopsies. In her travels to Malawi, she witnessed an issue with under-equipped neonatal wards, and thus in 2005 after moving to Rice, Dr. Richards-Kortum cofounded the Rice 360° Institute for Global Health where she began working with students on low-cost, low-power devices to save newborn lives. Her work has improved medical care for millions of newborns and saved thousands of lives in low-income countries. Her and her team’s successes to date include systems that help babies breathe and that help caregivers detect jaundice and accurately dose children’s liquid medication. For this work, she was the first Houston scientist and first Houston woman to win a coveted ‘genius grant’ from the MacArthur Foundation. …

“I ask my colleagues to join me in congratulating these outstanding Texas inventors. Their induction into the National Inventors Hall of Fame speaks volumes for the culture of invention, innovation, and entrepreneurship that exists in the great State of Texas.”