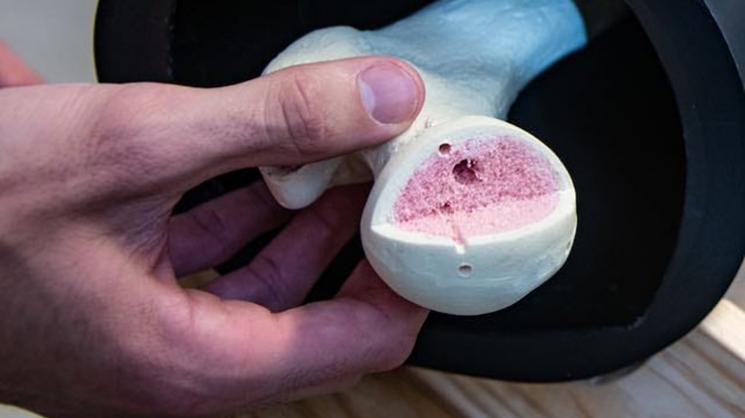 Threading a needle is hard, but at least you can see it. Think about how challenging it must be to thread a screw through a rod inside a bone in someone’s leg.

Rice University seniors at the Brown School of Engineering set out to help doctors simplify the process of repairing fractured long bones in an arm or leg by inventing a mechanism that uses magnets to set things right.

Rice University engineering students have created a device to simplify the insertion of screws that secure metal rods to fractured bones in limbs. The device, when secured on the leg of a patient, uses magnetic elements in the rod to guide proper placement of the screws.

The students who call themselves Drill Team Six chose the project pitched by Rice alumnus Dr. Ashvin Dewan, an orthopedic surgeon at Houston Methodist Hospital, to simplify a procedure by which titanium rods are placed inside broken bones to make them functional once more.

For its efforts, the team won the top prize, the Excellence in Engineering Award, at the school’s annual Engineering Design Showcase.

The student team — bioengineering majors Babs Ogunbanwo, Takanori Iida, Byung-UK Kang and Hannah Jackson and mechanical engineering majors Will Yarinsky and Ian Frankel — learned from Dewan that surgeons require many X-rays to locate pre-drilled 5 millimeter holes in the rod. The holes allow them to secure the rod to the bone fragments and hold them together.

The surgery typically requires doctors to insert the long rod with a guide wire inside into the end of the bone, drilling through marrow to align the fractured fragments. With that done, they depend on X-rays, their experience and, if necessary, a bit of trial and error to drill long surgical screws through one side of the bone, thread it through the rod and secure it to the other side.

“We want to reduce the amount of X-rays, the surgeon’s time, the operating room time, the setup time, everything,” Yarinsky said.

The Rice team would make the wire adjacent to the holes magnetic, because neither skin nor bone hinder a magnetic field.

“That way, the magnets hold their position and we can do the location process,” Frankel said. “Once we’ve found them and secured the rod, we remove the wire and the magnets with it.”

The exterior mechanism is a brace that can be securely attached to the arm or leg with Velcro. A mounted sensor can then be moved along the stiff, 3D-printed carbon-fiber rods or around the limb until it locates the magnet. Then, the angle of the sensor can be adjusted. As each of the three degrees of freedom come into alignment with the target, a “virtual LED” lights up on a graphic display wired to the sensor. Then, the sensor is removed and a drill keyed to the mechanism inserted.

“We do the angular part because the rod is not in the center of the leg, and the hole is not necessarily perpendicular to the surface,” Yarinsky said. “The rod is about 10 to 20 millimeters thick and has a hole on one side and a hole on the other. We don’t want to hit the first hole at an angle where we miss the second and don’t go all the way through.”

Working at Rice’s Oshman Engineering Design Kitchen (OEDK), the team tested its device on a mannequin leg and what it called a “wooden leg,” a frame that allowed for mounting the rod with its magnetized wire and checking the accuracy of their system.

Before it can be used by clinicians, the team said the device will require Food and Drug Administration approval.

“I’m very impressed with what the team put together,” said Dewan, who earned a bioengineering degree at Rice in 2005. “Where we ended up is completely different from what we imagined, but kudos to these guys. They went through many different proposals and ideas and ended up running with the one that seemed most promising.”

Having been through the senior capstone process at Rice himself, Dewan was particularly impressed with how the program has grown.

“The OEDK got off the ground a few years after I graduated, and at that point, senior design projects were isolated to individual projects,” Dewan said. “I didn’t work with mechanical or other engineering disciplines.

“I love the way they have a multidisciplinary approach to tackling problems,” he said. “I think it’s much more of a real-world experience for them.”

Sabia Abidi, a lecturer in bioengineering, served as the team’s adviser, and it was sponsored by Chuck and Sharon Fox.