Organ bioprinting gets a breath of fresh air 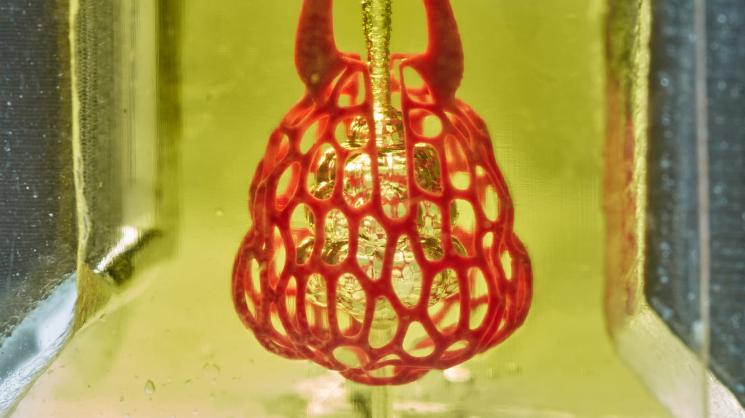 Bioengineers have cleared a major hurdle on the path to 3D printing replacement organs with a breakthrough technique for bioprinting tissues.

The research is featured on the cover of this week’s issue of Science. It includes a visually stunning proof-of-principle — a hydrogel model of a lung-mimicking air sac in which airways deliver oxygen to surrounding blood vessels. Also reported are experiments to implant bioprinted constructs containing liver cells into mice.

The work was led by bioengineers Jordan Miller of Rice University and Kelly Stevens of the University of Washington (UW) and included 15 collaborators from Rice, UW, Duke University, Rowan University and Nervous System, a design firm in Somerville, Massachusetts.

“One of the biggest road blocks to generating functional tissue replacements has been our inability to print the complex vasculature that can supply nutrients to densely populated tissues,” said Miller, assistant professor of bioengineering at Rice’s Brown School of Engineering. “Further, our organs actually contain independent vascular networks — like the airways and blood vessels of the lung or the bile ducts and blood vessels in the liver. These interpenetrating networks are physically and biochemically entangled, and the architecture itself is intimately related to tissue function. Ours is the first bioprinting technology that addresses the challenge of multivascularization in a direct and comprehensive way.” 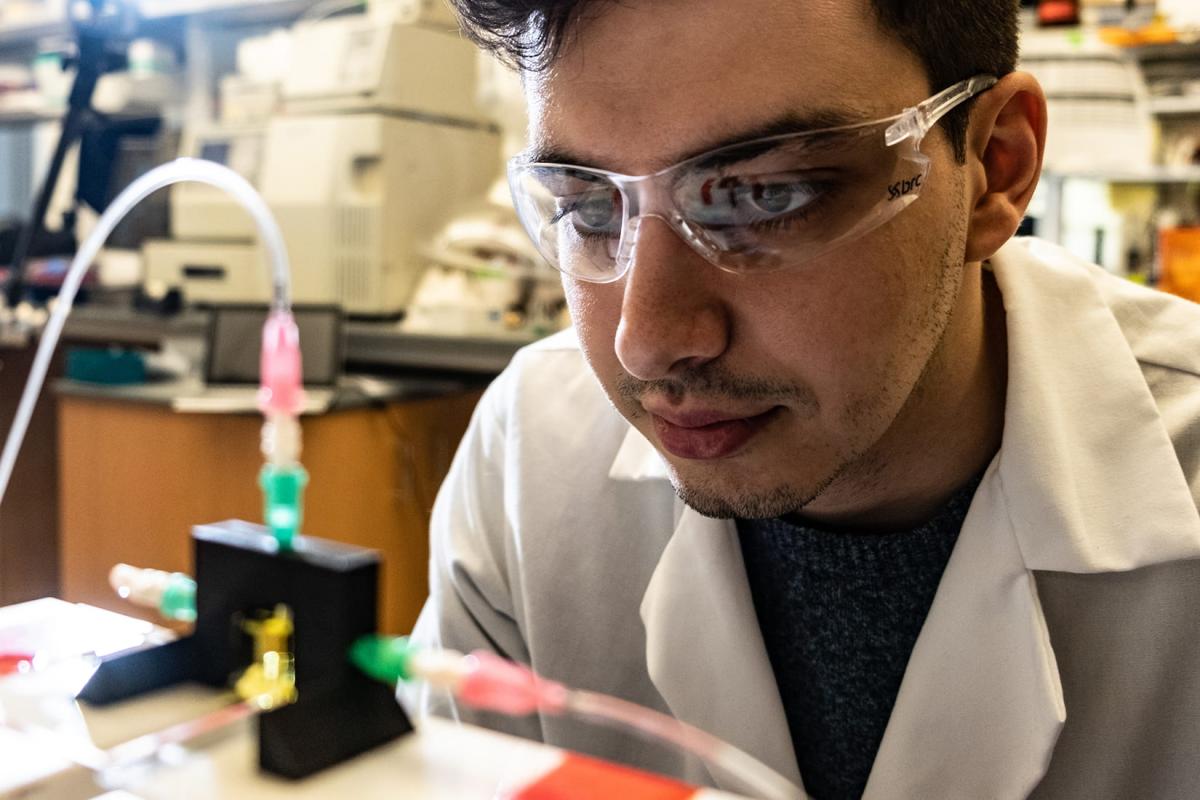 “Tissue engineering has struggled with this for a generation,” Stevens said. “With this work we can now better ask, ‘If we can print tissues that look and now even breathe more like the healthy tissues in our bodies, will they also then functionally behave more like those tissues?’ This is an important question, because how well a bioprinted tissue functions will affect how successful it will be as a therapy.”

The goal of bioprinting healthy, functional organs is driven by the need for organ transplants. More than 100,000 people are on transplant waiting lists in the United States alone, and those who do eventually receive donor organs still face a lifetime of immune-suppressing drugs to prevent organ rejection. Bioprinting has attracted intense interest over the past decade because it could theoretically address both problems by allowing doctors to print replacement organs from a patient’s own cells. A ready supply of functional organs could one day be deployed to treat millions of patients worldwide.

“We envision bioprinting becoming a major component of medicine within the next two decades,” Miller said.

“The liver is especially interesting because it performs a mind-boggling 500 functions, likely second only to the brain,” Stevens said. “The liver’s complexity means there is currently no machine or therapy that can replace all its functions when it fails. Bioprinted human organs might someday supply that therapy.”

To address this challenge, the team created a new open-source bioprinting technology dubbed the “stereolithography apparatus for tissue engineering,” or SLATE. The system uses additive manufacturing to make soft hydrogels one layer at a time. 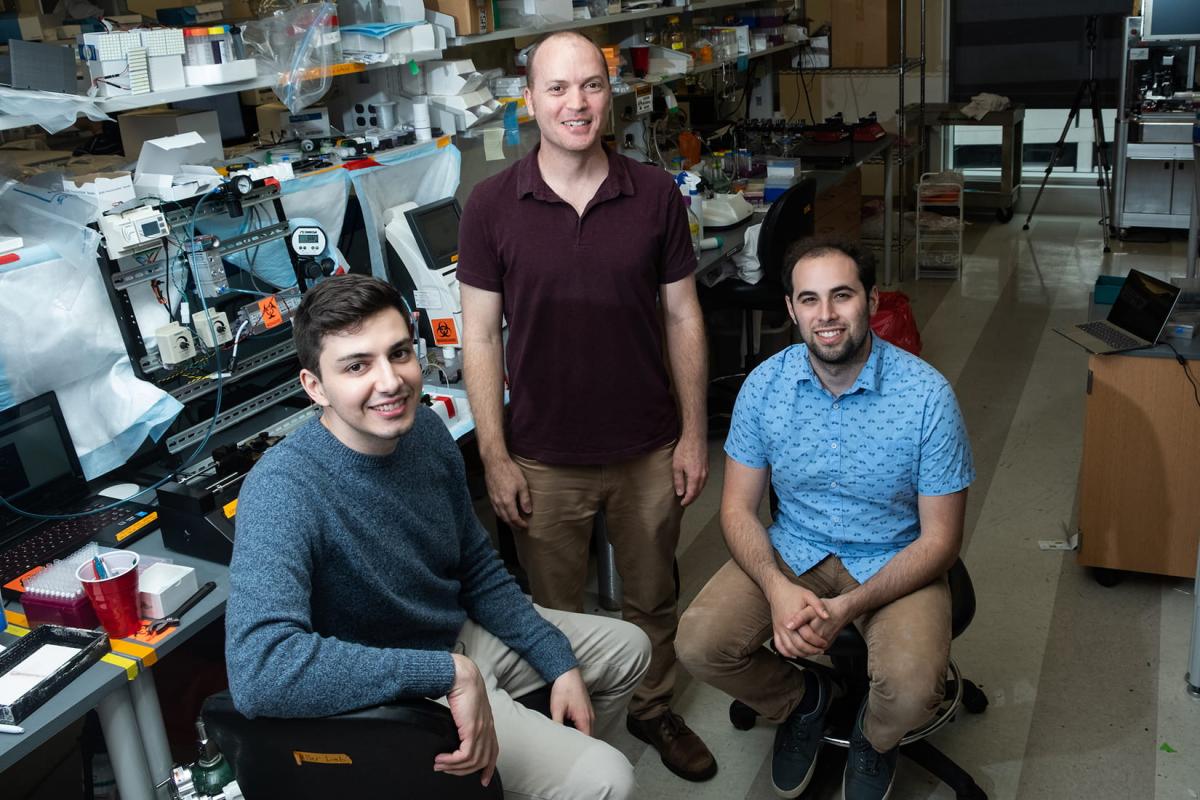 Layers are printed from a liquid pre-hydrogel solution that becomes a solid when exposed to blue light. A digital light processing projector shines light from below, displaying sequential 2D slices of the structure at high resolution, with pixel sizes ranging from 10-50 microns. With each layer solidified in turn, an overhead arm raises the growing 3D gel just enough to expose liquid to the next image from the projector. The key insight by Miller and Bagrat Grigoryan, a Rice graduate student and lead co-author of the study, was the addition of food dyes that absorb blue light. These photoabsorbers confine the solidification to a very fine layer. In this way, the system can produce soft, water-based, biocompatible gels with intricate internal architecture in a matter of minutes.

Tests of the lung-mimicking structure showed that the tissues were sturdy enough to avoid bursting during blood flow and pulsatile “breathing,” a rhythmic intake and outflow of air that simulated the pressures and frequencies of human breathing. Tests found that red blood cells could take up oxygen as they flowed through a network of blood vessels surrounding the “breathing” air sac. This movement of oxygen is similar to the gas exchange that occurs in the lung’s alveolar air sacs.

To design the study’s most complicated lung-mimicking structure, which is featured on the cover of Science, Miller collaborated with study co-authors Jessica Rosenkrantz and Jesse Louis-Rosenberg, co-founders of Nervous System.

“When we founded Nervous System it was with the goal of adapting algorithms from nature into new ways to design products,” Rosenkrantz said. “We never imagined we’d have the opportunity to bring that back and design living tissues.”

In the tests of therapeutic implants for liver disease, the team 3D printed tissues, loaded them with primary liver cells and implanted them into mice. The tissues had separate compartments for blood vessels and liver cells and were implanted in mice with chronic liver injury. Tests showed that the liver cells survived the implantation. 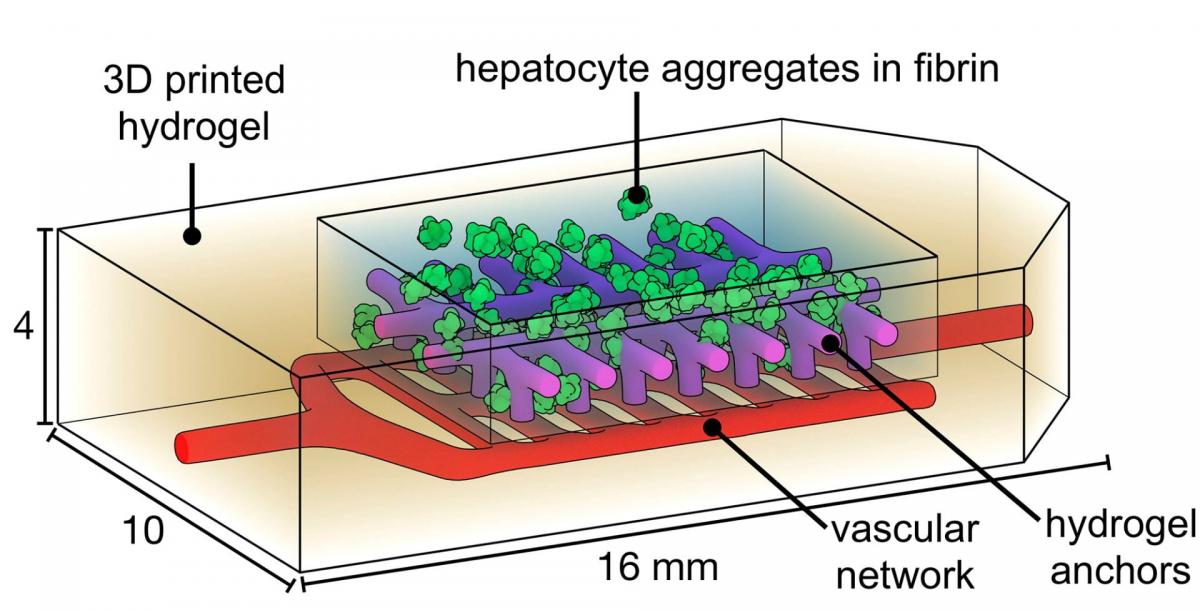 Miller said the new bioprinting system can also produce intravascular features, like bicuspid valves that allow fluid to flow in only one direction. In humans, intravascular valves are found in the heart, leg veins and complementary networks like the lymphatic system that have no pump to drive flow.

“With the addition of multivascular and intravascular structure, we’re introducing an extensive set of design freedoms for engineering living tissue,” Miller said. “We now have the freedom to build many of the intricate structures found in the body.”

Miller and Grigoryan are commercializing key aspects of the research through a Houston-based startup company called Volumetric. The company, which Grigoryan has joined full time, is designing and manufacturing bioprinters and bioinks.

Miller, a longstanding champion of open-source 3D printing, said all source data from the experiments in the published Science study are freely available. In addition, all 3D printable files needed to build the stereolithography printing apparatus are available, as are the design files for printing each of the hydrogels used in the study.

“Making the hydrogel design files available will allow others to explore our efforts here, even if they utilize some future 3D printing technology that doesn’t exist today,” Miller said.

Miller said his lab is already using the new design and bioprinting techniques to explore even more complex structures. 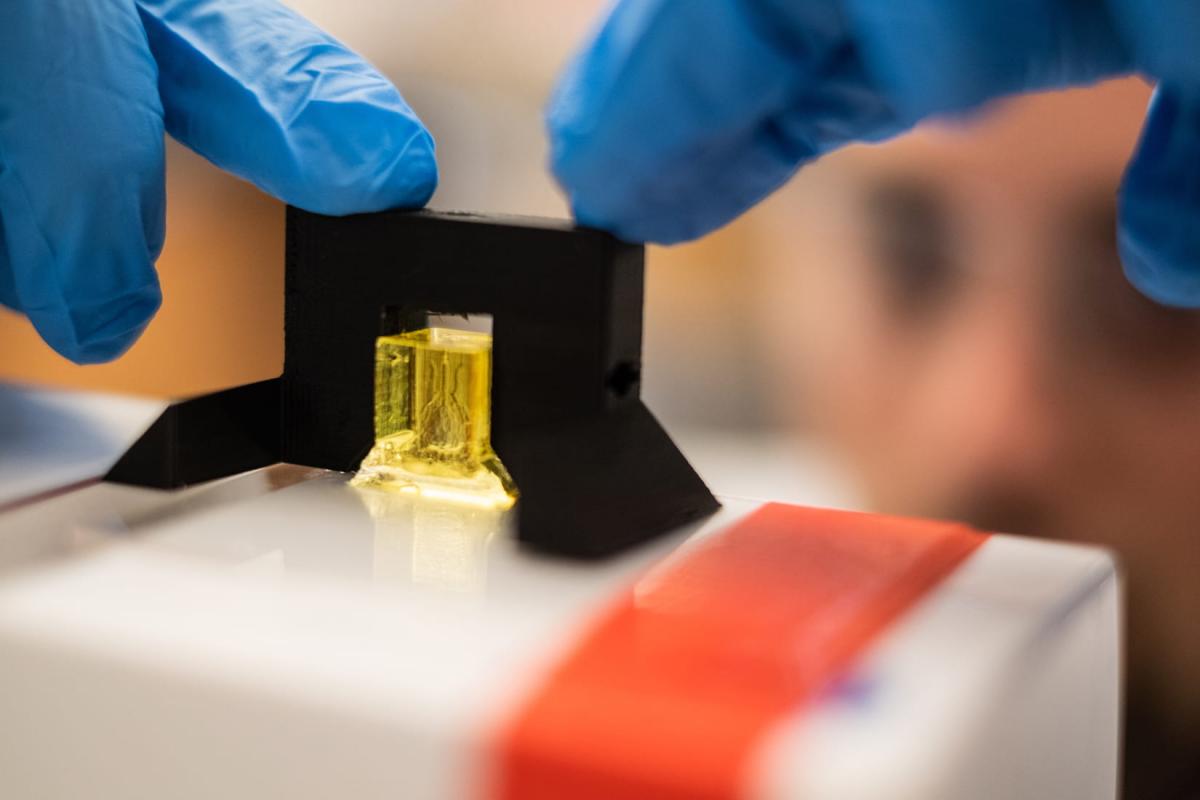 “We are only at the beginning of our exploration of the architectures found in the human body,” he said. “We still have so much more to learn.”

VIDEO is available at: