Help for patients with sickle cell disease may soon come from gene editing to fix the mutation that causes the disease and boost the patient’s own protective fetal hemoglobin.

New research shows that using CRISPR-Cas9 and a corrective short DNA template to repair the sickle cell mutation in a patient’s hematopoietic stem cells (HSCs) could be efficient and safe.

Bioengineer Gang Bao of Rice University’s Brown School of Engineering conducted the research in collaboration with Texas Children’s Hospital, Baylor College of Medicine and Stanford University. The revelation is one of several in a new study led by Bao and Vivien Sheehan, an assistant professor at Baylor and a member of the sickle cell program at Texas Children’s Hematology Center.

Today, some people afflicted with the disease are treated with stem cells from a matched, related donor, an option researchers says is available to fewer than 15% of patients. A better strategy would be modifying the patient’s own hematopoietic stem and progenitor cells (HSPCs), an option theoretically available to every patient because there would be no risk of rejection.

Ideally, stem cells isolated from the patient’s bone marrow would be gene-edited and tested, and chemotherapy would be used to reduce the patient’s stem cells to make room for the edited cells. Bao said the corrected cells would then be implanted back into the patient, where they could proliferate and spawn healthy blood cells.

For the new study, and for the first time, Bao and his team tested patient HSPCs in rodents and demonstrated that a fraction of the gene-edited cells from patients could survive and function for about 4 months.

These stem cells were from the peripheral blood of five patients and the bone marrow of two patients with the disease, all obtained by Sheehan. The Sheehan lab characterized the type of hemoglobin made by the edited cells and showed that gene editing can provide enough protective and normal hemoglobin to prevent sickling, even under the severe hypoxia that promotes sickling.

Early tests using wild-type Cas9 protein – the “scissors” that target and cut specific sections of DNA – from Streptococcuspyogenes led to stem cells with high levels of unintended DNA edits. These off-target edits included large chromosomal deletions and inversions that could cause disease.

In a second round of tests, the Rice lab adopted a more recent “high-fidelity” version of Cas9developed by Integrated DNA Technologies. That led to significantly reduced off-target edits, Bao said.

Not all the stem cells isolated from a patient with the sickle mutation are fixed by gene editing. At best, according to experiments by the Bao lab, it fixed up to 40% of them. In another 50% of cells, DNA was cut and not repaired by the corrective DNA template, but that appeared to boost the stem cells’ expression of fetal hemoglobin (HbF), a type made by a different gene that does not carry the sickle mutation and is normally turned off a few months after birth.

Fetal hemoglobin is known to mute the effects of sickle cell disease. Bao suspects that if the expression of fetal hemoglobin in edited cells persists, 90% of the stem cells from patients will either have the sickle mutation fixed, or have sickling prevented by fetal hemoglobin.

“Our hope is that if we take out a fraction of HSPCs from a patient’s bone marrow and damage the remaining ones, then edit the HSPCs and deliver them back, the combination of gene-corrected and HbF-expressing cells will be enough to cure the disease,” Bao said. 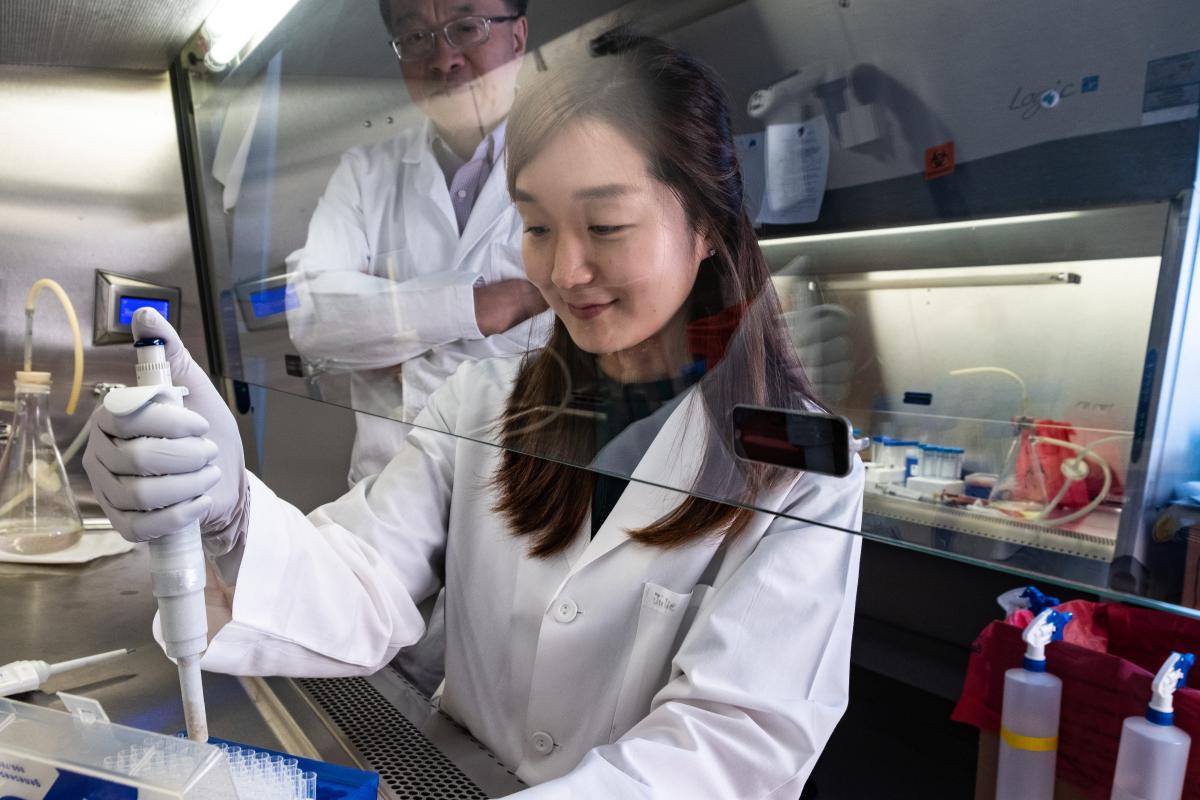 That 10% of stem cells continued to produce sickle cells should not be a big concern, he said. “The good news is that normal red blood cells have a lifespan about nine times that of the sickle cells,” Bao said. “That means over time, the majority of the red blood cells would be normal cells. That’s the scenario we would like to see.”

The researchers don’t yet know if cutting beta-globin to boost fetal hemoglobin levels would provide a long-lasting benefit or whether it risks inducing beta thalassemia, a blood disorder that reduces the production of hemoglobin. “There is a risk, and we need to understand it better,” Bao said.

It is also unclear how many stem cells must be edited to provide long-term relief to a patient. “We don’t know what percentage of the HSCs with gene correction could effectively treat sickle cell disease,” he said. “Some people say just a few percent, and some say 5-10%. My guess is around 5% would be sufficient, but the exact percentage could only be established through clinical trials.”

The road to human trials may still take some time, Bao said. “Technology-wise, we are ready to do a clinical trial,” he said. “But just getting approval for a trial will require a lot of resources. We need to compile the data and do additional experiments to address the safety issues.”

The research was supported by the Cancer Prevention and Research Institute of Texas, the National Heart, Lung and Blood Institute and National Institute of Diabetes and Digestive and Kidney Diseases of the National Institutes of Health, the Chao Physician-Scientist Award, the Stanford Maternal and Child Health Research Institute, the Amon G. Carter Foundation, a Laurie Kraus Lacob Faculty Scholar Award in Pediatric Translational Research, and the Sutardja Foundation.