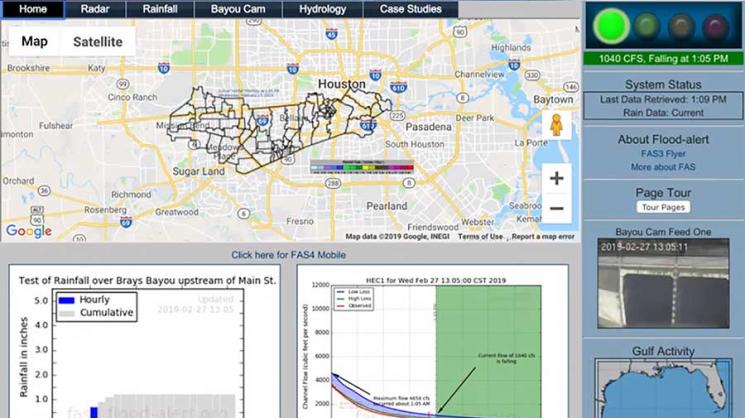 Although Hurricane Harvey’s waters have long since receded, it is only a matter of time before the next flooding event will strike the Bayou City. And when that storm comes, another of the area’s watersheds will have a flood alert system thanks to researchers from Rice University and funding from Rice’s Kinder Institute for Urban Research.

Phil Bedient, the Herman and George R. Brown Professor of Civil Engineering and director of Rice’s Severe Storm Prediction, Education and Evacuation from Disasters Center (SSPEED), and Jamie Padgett, an associate professor of civil and environmental engineering, have developed a system to monitor White Oak Bayou, one of the major watersheds in the Houston metropolitan area. The bayou stretches from central to northwest Harris County. The new system mirrors an existing one developed by SSPEED to monitor Brays Bayou and alert the Texas Medical Center of flooding.

The researchers used much of the technology from the Brays Bayou system to develop the White Oak system, which relies on real-time, radar-based rainfall estimates as rain is falling across a watershed. The system takes in new radar data every five minutes and generates a predictive flood map, which is updated every 15 minutes. Color coding indicates areas and travel routes likely to flood.

“Not only does the flood plain map have the capability of zooming into certain hotspots and major transportation routes that have repeatedly suffered flooding in the past, but it also demonstrates the flood risks at selected critical transportation locations across White Oak Bayou,” Bedient said.

The researchers hope to secure additional funding to create a tool that can be coupled with the flood monitoring system to let residents and first responders see if they can make it to and from critical facilities such as hospitals, shelters and police and fire stations.

“This tool would allow emergency personnel to begin flood preparations with as much lead time as possible,” Padgett said. “We are very encouraged that our research results suggest that this type of expansion of the system is possible.”

Bedient and Padgett hope the system will be useful not just during flooding events, but also in determining how to mitigate and avoid future events.

“There is no doubt in our minds that this system and hopefully future systems will save lives,” Padgett said.

Bedient and Padgett’s future work will focus on the Greens Bayou and Cypress Creek watersheds, thanks to recent funding from the Greater Houston Flood Mitigation Consortium.

The Greens Bayou project will focus on addressing neighborhood-scale flood issues in four neighborhoods in conjunction with Jim Blackburn and Andrew Juan from Rice and the SSPEED Center, Susan Rogers from the University of Houston and Sam Brody and Toni Sebastian from Texas A&M University at Galveston. The Cypress Creek project will focus on the overflow problem at Addicks Reservoir and creating additional storage for that section of the watershed.

The alert system is accessible online at http://fas-wob.org/.