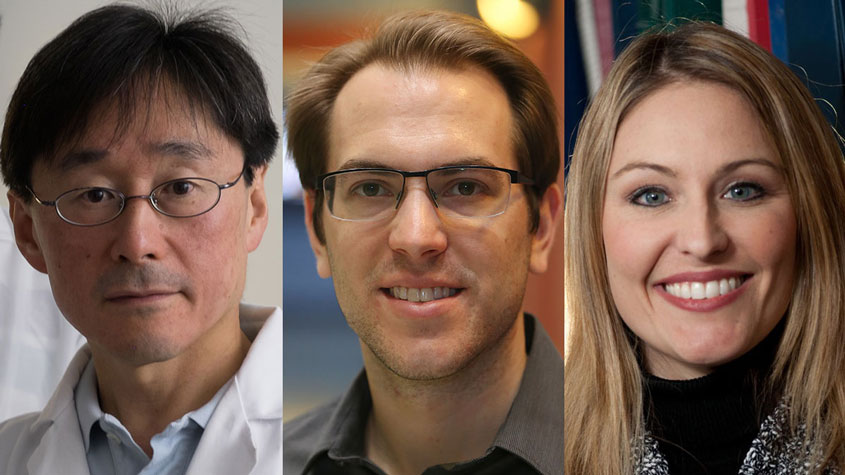 Three faculty members, and members of the Ken Kennedy Institute, in the George R. Brown School of Engineering have been named to endowed chairs, effective July 1.

Junichiro Kono, professor of electrical and computer engineering, of materials science and nanoengineering, of physics and astronomy, and chair of applied physics, will become the Karl F. Hasselmann Professor in Engineering.

Kono earned his Ph.D. in physics from the State University of New York at Buffalo in 1995 and joined the Rice faculty in 2000. His research is concerned with fundamental studies of light-matter interaction phenomena in quantum materials, especially using intense light and under extreme conditions of low temperature and high magnetic field, to realize new phases of matter. Possible applications include ultrafast optoelectronic devices and quantum technologies.

Kono has published more than 200 journal articles, holds two patents and received the National Science Foundation CAREER Award in 2002. He has been a fellow of the American Physical Society since 2009, the Optical Society since 2015 and SPIE since 2019. Kono founded the international research experience program called NanoJapan for undergraduates. It was funded by the NSF and received the Heiskell Award for Innovation from the Institute of International Education in 2008.

In 2017, Kowal earned his Ph.D. in statistical science, with a minor in finance, from Cornell University. He received a B.A. in mathematics from Washington University in St. Louis in 2012 and a master’s degree in statistics from Cornell in 2015. He joined the Rice faculty in 2017.

Padgett earned her Ph.D. in civil engineering from Georgia Tech in 2007 and joined the Rice faculty that year. Her research focuses on risk assessment of structures and infrastructure exposed to multiple hazards, such as hurricanes, floods and earthquakes. She serves on the leadership of national research centers that advance resilience modeling for infrastructure and their surrounding communities.

She was recently named a Fellow of the Structural Engineering Institute of the ASCE and was founding chair of its technical committee on Multiple Hazard Mitigation. Padgett has received a 2011 NSF CAREER Award and the 2017 ASCE Walter L. Huber Civil Engineering Research Prize, and in 2019 named the Emergency Management Institute’s Objective Resilience Distinguished Lecturer.