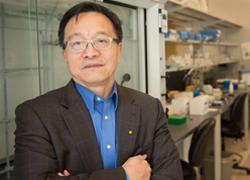 Rice University bioengineer Gang Bao, a pioneer in the search for a way to treat and perhaps cure sickle cell disease, is co-author of a significant step forward revealed in Science Translational Medicine and led by his colleagues at Stanford University.

The international team of researchers reported on the successful gene correction in hematopoietic stem and progenitor cells (HSPCs) from patients with sickle cell disease in a preclinical study, as well as 20% gene correction after transplantation of gene-edited HSPCs into immunodeficient mice. The team used CRISPR-Cas9 “nanoscissors” to fix the mutation that causes the body to make sickle cells.

The hope is that corrected stem cells injected into a patient, through a process known as engraftment, will survive and proliferate, replacing mutant stem cells to curtail or even eliminate the painful disease.

“This study was designed to lead to a phase one clinical trial, which has now been approved,” said Bao, chair of Rice’s Department of Bioengineering, whose team designed the CRISPR-based guide RNA system used in the research and tracked off-target edits that were determined to be of limited risk.

“The primary significance of this work is that the engraftment rate increased roughly fourfold,” he said. “If you deliver cells to patients after editing and most of the cells die, then efficacy will be very low. So any improvement is a major advance.”

He said damaging mutant stem cells through chemotherapy or radiation before injecting gene-edited cells either into the bloodstream or directly into bone marrow will improve their chance of proliferating. That strategy is the focus of many efforts to halt sickle cell disease, including the Stanford study and a separate study at Rice.

Bao is the Foyt Family Professor of Bioengineering and a professor of chemistry and of materials science and nanoengineering. He is also a Cancer Prevention and Research Institute scholar.