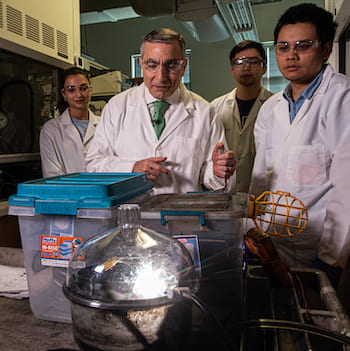 Rice University was a double winner in the annual Create the Future Design Contest, an international competition in its 19th year put on by Tech Briefs.

Flash graphene is a process developed by the Tour lab to turn waste of all kinds into valuable graphene with a short blast of electricity. The lab recently announced a refinement aimed at converting plastic.

“This flash graphene process developed by Duy Luong in my group is continuing to turn heads,” Tour said. “First for the production of graphene on a large scale from coal and petroleum coke, and then for the low-cost conversion of all sorts of human waste products like plastic bottles and food waste. I’m delighted to see Tech Briefs recognize the potential of this technology.”

The painless defibrillation project co-led by Texas Heart Institute (THI) and Rice and introduced in 2017 won the Medical division, beating 127 other competitors.

The project led by Dr. Mehdi Razavi at THI involves implantable microchips that can be placed around the heart for synchronized, wireless, batteryless pacing and automatic defibrillation when needed.

“This is indeed an exciting project with lofty goals,” Aazhang said. “It is a prime example of how thinking collaboratively can advance and create a new field. Our offices may be across the street but our trainings are miles apart. We are grateful to have the opportunity to work with Dr. Razavi and his team.”

“This project has the potential to improve the quality of life for many people with heart disease,” Cavallaro added. “We are excited that the integration of advanced algorithms and integrated circuit design can have major impact in new pacemaker systems.”

Each category winner will receive a workstation computer courtesy of Hewlett-Packard and NVIDIA.

The winner of the $20,000 grand prize was RepelWrap, a plastic film that repels liquids and microbial contamination from surfaces, developed at McMaster University in Hamilton, Ontario.