Provost will assume command of university next summer 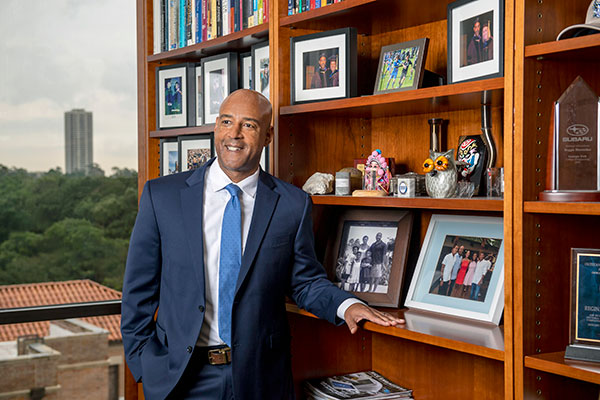 Reginald DesRoches, who is now serving as the university’s provost, has been named as the next president of Rice University.

Rice’s Board of Trustees selected DesRoches, an internationally recognized structural engineer and earthquake resilience expert, after a nationwide search for an academic leader to take command at one of the nation’s premier institutions of higher learning. DesRoches will succeed President David Leebron, who previously announced his plan to step down next summer after the end of the current academic year.

“When President Leebron told us he was stepping down, we knew we wanted to build upon what he has accomplished these last 18 years,” said Robert Ladd, chairman of the Board of Trustees. “We embarked on a search for a proven leader who will be transformational, who will lead Rice to even greater stature and national recognition. We have found a leader who is inspirational and universally respected, a leader who is visionary, strategic and kind. We are proud to welcome Reginald DesRoches as our university’s next president.”

DesRoches (pronounced “day-ROH-sh”) will become the eighth president of Rice when he assumes his new position on July 1, 2022.

“I am deeply honored to be named the next president of Rice University,” DesRoches said. “The past 4½ years at Rice have been among the most rewarding in my professional career and I look forward to building on the tradition of excellence established by President Leebron and those who served before him.”

DesRoches has been provost since Leebron appointed him as the university’s chief academic officer in 2020. As provost, he has led the university’s academic, research, scholarly and creative activities through the challenges posed by the COVID-19 pandemic, including the sudden suspension of classroom instruction and Rice’s successful conversion to remote learning. In less than two years, he has not only dramatically increased the university’s research awards and launched several new centers and institutes, but also forged new partnerships and programs with institutions and organizations throughout the Houston area, including the Texas Medical Center.

Under DesRoches' leadership, Rice has launched several new majors and professional master’s programs, including a new undergraduate business major. He has established the Office of Diversity, Equity and Inclusion, which has been instrumental in dramatically increasing the diversity of Rice’s faculty and graduate student population. He also is leading the first major expansion of the undergraduate student body in over a decade.

DesRoches has been at Rice since 2017, when he accepted the post as the William and Stephanie Sick Dean of Engineering at the George R. Brown School of Engineering. As the leader of Rice’s engineering school, he oversaw nine departments, 137 faculty and 2,500 students. During his time as dean, the school increased in size, visibility and program rankings. It also underwent significant growth in research programs. Several key interdisciplinary initiatives were launched during DesRoches’ term as dean, including new efforts in the areas of neuroengineering and synthetic biology. He also led the establishment of the first-of-its-kind collaborative research center in India with the Indian Institute of Technology Kanpur.

“Reggie DesRoches is an outstanding choice as Rice’s next president,” Leebron said. “I have had the privilege of working closely with Reggie over the last 4½ years, first in his capacity of dean of engineering and then as provost, and observed firsthand his extraordinary leadership, values, thoughtfulness and ambition for Rice. I am confident he will fully achieve the aspirations of our ‘Be Bold’ campaign, and take Rice to new heights of achievement and impact.”

Before his appointment at Rice, DesRoches served as chair of the School of Civil and Environmental Engineering at Georgia Tech in Atlanta. As chair, he led a major renovation of the school’s main research and teaching home, and he spearheaded a major fundraising effort for the school that doubled the number of endowed chairs and professors. During his tenure, the engineering school’s U.S News & World Report graduate rankings rose dramatically, reaching No. 2 in the nation — the highest in the school’s history.

Born in Port-au-Prince, Haiti, DesRoches was raised in the New York City borough of Queens. A boyhood love of science and math encouraged him to pursue a degree in mechanical engineering. While studying at the University of California, Berkeley, DesRoches witnessed the damage wrought by the historic 1989 Loma Prieta earthquake. That experience led him to focus on earthquake resiliency as he pursued his master’s and Ph.D. degrees in structural engineering at Berkeley.

Since then, DesRoches has become a nationally recognized expert on earthquake resilience who has testified before committees of the U.S. House and Senate. He currently chairs the U.S. Department of Commerce National Institute of Standards and Technology (NIST) National Construction Safety Team, which is overseeing NIST’s investigation of the collapse of the Champlain Towers South Condominium in Surfside, Florida. He previously served on the Advisory Committee for the Engineering Directorate for the National Science Foundation.

DesRoches has authored over 300 technical publications and has mentored more than 30 doctoral students, many of whom hold faculty positions at top universities around the world.

“When President-elect DesRoches begins his work next summer, he will be taking charge at an extraordinary time for Rice,” Ladd said. “We just launched our $2 billion ‘Be Bold’ capital campaign, the largest fundraising effort in our university’s history. We recently received a $100 million gift from the Moody Foundation that will fund the construction of a new student center and support other programs for our students. That follows the $100 million grant from the Welch Foundation launching the Welch Institute for advanced materials research. Last summer, we began construction on the new Engineering and Sciences building and we are about to begin work on our new Visual and Dramatic Arts building. And we have just been invited to join the American Athletic Conference, which coincides with a renewed commitment to athletics at Rice. These are just a few of the many significant, positive developments on campus that make this a remarkable time for Rice University.”

DesRoches’ wife, Paula, is the director of employee health and occupational medicine at Houston Methodist. They have three children: Andrew, Jacob and Shelby. Their daughter, Shelby, is a Rice student in the Class of ’23.

“I am excited to continue working with the university’s outstanding faculty, students, staff, alumni and community partners to grow the visibility and impact of our research and dedication to the greater good,” DesRoches said. “I look forward to maintaining our commitment to excellence in undergraduate and graduate education as well as our core values of diversity, equity and inclusion. I firmly believe Rice is poised and well positioned to reach even greater heights of impact and excellence.”