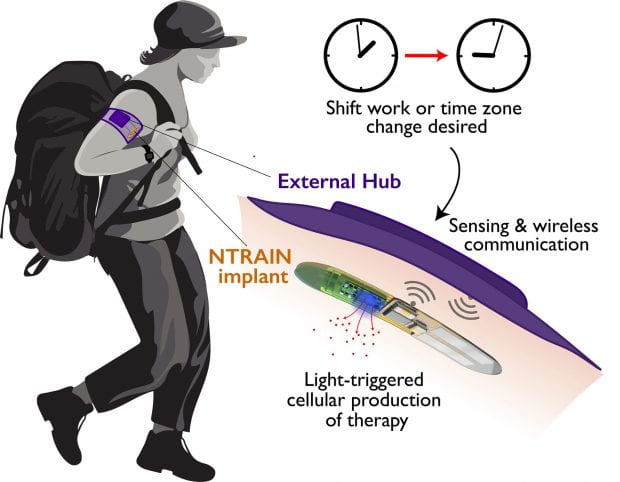 Five Rice University engineering laboratories are part of a $33 million national effort to develop a wireless, fully implantable device that can control the body’s circadian clock, halving the time it takes to recover from jet lag and similar disruptions to the body’s sleep/wake cycles.

Led by Northwestern University and funded by the Defense Advanced Research Projects Agency (DARPA), the project will blend bioelectronics, synthetic biology and traditional electronics to create a “living pharmacy” that produces the same peptide molecules the body naturally makes to regulate sleep cycles. The device could be a powerful tool for military personnel, who frequently travel across multiple time zones, as well as first responders and other shift workers who oscillate between overnight and daytime shifts.

Faculty in Rice’s Brown School of Engineeringwill lead the development of key components of the proposed technology. Omid Veiseh, assistant professor of bioengineering, will oversee the creation of engineered cells that produce the therapeutic biomolecules, and Jacob Robinson, associate professor of electrical and computer engineering, will oversee the development of the wireless bioelectronic implant that houses the engineered cells and regulates drug production.

Called NTRAIN (Normalizing Timing of Rhythms Across Internal Networks of Circadian Clocks), the project is part of DARPA’s Advanced Acclimation and Protection Tool for Environmental Readiness (ADAPTER) program to help address the challenges of travel, including jet lag, fatigue and gastrointestinal issues.

“Sleep control is something we can track while we develop this implant, but the real innovation here is being able to produce drugs inside the patient,” Veiseh said.

“If we can bring all of that manufacturing right into the patient and produce high-quality compounds on an as-needed basis, the possibilities are infinite,” Veiseh said. For a start, the technology could be used to manage diabetes and other chronic diseases where people regularly inject themselves with drugs.

Robinson said the technology will provide plenty of power while enhancing device security.

“We’ll design the device so it can only communicate in the near field, meaning only over a couple of centimeters,” he said. “So you’d essentially have to be in contact with the device in order to hack it.”

Veiseh and Robinson said an additional safety feature will allow a user to deactivate the device permanently by sending a signal for the engineered cells to immediately kill themselves.

The first phase of the highly interdisciplinary program will focus on developing the implant. The second phase, contingent on the first, will validate the device. If that milestone is met, then researchers will test the device in human trials as part of the third phase. The full funding corresponds to $33 million over 4 1/2 years.

“This control system allows us to deliver a peptide of interest on demand, directly into the bloodstream,” said NTRAIN principal investigator Jonathan Rivnay, an assistant professor of biomedical engineering in Northwestern’s McCormick School of Engineering. “No need to carry drugs, no need to inject therapeutics and — depending on how long we can make the device last — no need to refill the device. It’s like an implantable pharmacy on a chip that never runs out.”

Other members of the NTRAIN team are Fred Turek, Martha Hotz Vitaterna, Josiah Hester, Guillermo Ameer, Peng Jiang and Phyllis Zee, all of Northwestern; Doug Weber, Tzahi Cohen-Karni, Darcy Griffin, Carl Olson and Matt Smith, all of Carnegie Mellon; Karrie Fitzpatrick of the University of Minnesota; Florian Solzbacher of the University of Utah; and Rob Franklin of Blackrock Microsystems.