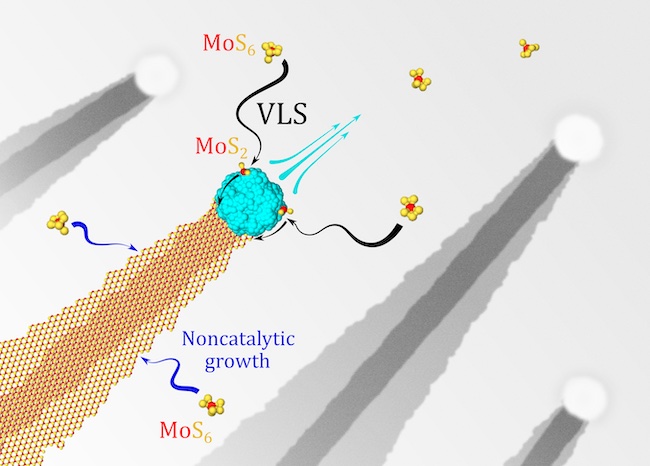 Materials theorist Boris Yakobson and his team at Rice University’s George R. Brown School of Engineering collaborated with the Honda Research Institute and others to make tightly controlled bilayer nanoribbons of the material commonly known as MoS2, a step forward with potential applications in quantum computing.

Honda, with scientists at Rice, Columbia University and Oak Ridge National Laboratory, found that nanoparticles of nickel exposed to molybdenum oxide and sodium bromide powders and sulfur gas in a chemical vapor deposition furnace wrangle the resulting nanoribbons into shape, constraining their width to several micrometers. At the same time, the nickel catalyzes a thinner second layer of less than 30 nanometers, roughly equivalent to the width of the nanoparticle itself.

The study appears in Science Advances.

MoS2 is a transition metal dichalcogenide, with a layer of molybdenum atoms sandwiched between sulfur in a crystal lattice. In bulk form, it’s valued for its mechanical strength and use as a lubricant, and in 2D form for its semiconducting properties. These make MoS2 nanoribbons a possible boon for microelectronics and catalysis, and any process that helps make them in bulk will be welcome.

“The value originates from the very narrow dimensions of the nanowires, which can serve as single-electron transistors,” said Yakobson, who described the underlying phenomenon as a Coulomb blockade, a quantization of electrical charge in which voltage rises and falls in steps rather than at a steady rate. The effect has been observed in quantum dots, in which conductance is not constant at low bias voltages.

“The characteristic current oscillations with gate voltage rise have never been observed at such a high temperature (60 Kelvin or -351 degrees Fahrenheit),” he said. “This suggests the further formation of quantum dots with 1 nanometer diameter and the possibility of controlled single-photon emission, the qubits in quantum computing.”

“This is remarkable, as normally the oscillations are observed only at temperatures below 4 K in 2D flakes,” added co-author and Rice graduate student Jincheng Lei.

The researchers discovered that a moist environment was necessary for atoms of sodium, molybdenum, nickel and oxygen to settle on the silicon oxide/silicon substrate, whereupon exposure to sulfur at 770 degrees Celsius (1,418 F) prompted the formation of MoS2 bilayers. The same process without nickel yielded common MoS2 flakes.

An interesting aspect of the growth process is that the nickel, deposited as a liquified droplet, contributes to the formation of both the wide bottom and thin top ribbons. The bottom serves as an epitaxial template as the droplet catalyzes the thin needle of MoS2 on top. They researchers found putting a trench in the substrate could trap the nickel droplet and stop ribbon formation entirely.

Why the ribbons form at all was a matter for Rice to investigate. Yakobson and his Rice co-authors Lei and research scientist Ksenia Bets performed first-principle calculations to discover that noncatalytic growth is responsible for the wide bottom layer but the nickel nanoparticle is directly responsible for catalyzing the thinner ribbon on top.

“The growth in this system is quite peculiar in that it is present in two forms at the same time,” Bets said. “In both cases, the MoS6 molecule serves as a precursor, and the extra four sulfur atoms need to be removed to form an MoS2 crystal. A very fast catalytic desulfurization on the surface of the nickel particle facilitates the first mechanism, resulting in the formation of the narrow top ribbon.

“In contrast, the second process happens directly on the edge of the bottom layer and is much slower, leading to continuous slow expansion. By depositing MoS2 on one side, the nickel particle is propelled forward, like a jet ski, and the top layer ribbon is left behind as a footprint, while the bottom layer continues to slowly expand akin to the waves behind a boat.”

The researchers also found the vapor-liquid-solid mechanism involved led to a speed of growth orders of magnitude higher than conventional growth of MoS2 flakes.

As the nickel desulfurized MoS6, the energy barrier dropped significantly, leading to a bilayer ribbon that formed 23 times faster than it did in noncatalytic growth simulations. The phenomenon matched what Honda scientists saw in their experiments.

That speed could make the ribbons more practical for incorporation into products.

The work aligns nicely with a recent study by Yakobson’s group, including Lei, that analyzed how MoS2 flakes flash into existence during chemical vapor deposition. Like that work, the new one could lead to techniques applicable to making nanoribbons of other dichalcogenides, according to the researchers.

Co-authors of the new paper are Emmanuel Okogbue of Honda; Baichang Li, Yang Liu and James Hone of Columbia; and Xiahan Sang and Raymond Unocic of Oak Ridge. Yakobson is the Karl F. Hasselmann Professor of Materials Science and NanoEngineering and a professor of chemistry.