Rice alumni and supporters gathered physically and virtually Nov 18 to celebrate the establishment of the Sidney Burrus Chair in the George R Brown School of Engineering. 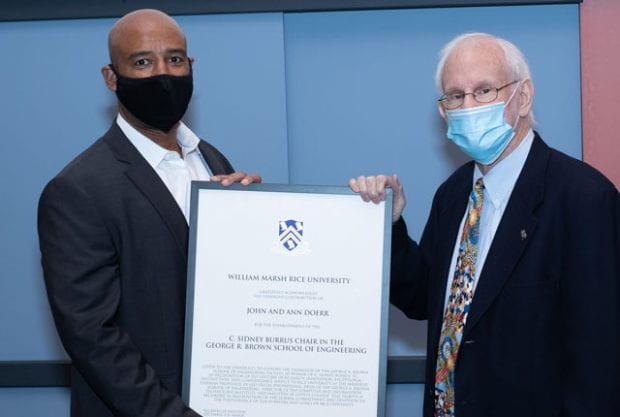 Rice alumni and supporters gathered physically and virtually Nov. 18 to celebrate the establishment of the Sidney Burrus Chair in the George R. Brown School of Engineering.

Made possible by the generosity of Ann and John Doerr, the chair honors Burrus, a pioneer in the field of digital signal processing (DSP), the recipient of multiple teaching awards and an early advocate for the use of technology in teaching and learning.

A native of Abilene, Texas, who grew up in the small farm community of McKinney, Burrus was interested in mathematics and science from an early age. After earning bachelor’s and master’s degrees in electrical engineering at Rice, he served in the Navy before earning his doctorate at Stanford.

He joined Rice’s engineering department in the late 1960s, and throughout his decadeslong career he helped establish Rice as a leader in DSP. He’s also been on founding committees for universities in Germany, Vietnam and Pakistan, and he’s held visiting positions at the Massachusetts Institute of Technology and the University of Erlangen in Germany.

Burrus most recently served as the Maxfield and Oshman Professor Emeritus of Electrical and Computer Engineering at Rice and dean emeritus of the School of Engineering. After retiring, he continued to teach until a few months ago. He received multiple teaching awards (1969, 1974, 1975, 1976, 1980 and 1989), and in 2007 he and his late wife Mary Lee received the Association of Rice Alumni’s highest honor, the Gold Medal.

At an intimate gathering in Duncan Hall’s McMurtry Auditorium, Reginald DesRoches, Rice provost and former School of Engineering dean, said Burrus was one of the first people to reach out to him after he arrived at Rice in 2017.

“We would frequently get together to chat about the dean of engineering position at Rice, and about the unique culture here,” DesRoches said. “Although I have never taken his class, I can see why he has received so many teaching awards. I would always leave my meetings feeling wiser, and ready to tackle the challenges of being dean.”

Rice President David Leebron said Burrus exemplifies the very best of the university and that such an honor is fitting. Leebron also thanked Ann and John Doerr for their generosity of ideas and support that have helped to advance knowledge and create leaders like Burrus at Rice.

“What Ann and John exemplify is the ideal understanding of what universities are for, and in some sense, are about,” Leebron said. “This new chair and others are making possible a new step forward for our School of Engineering, which has been, in many ways, the leading edge of our university.”

Ann Doerr, a Rice trustee emerita, and John Doerr, a Rice Distinguished Alumnus, said they couldn’t be happier to establish a chair in honor of Burrus.

“Sidney is the perfect embodiment of a Rice professor,” Ann Doerr said. “He is a leader in research, a thoughtful and encouraging mentor, a dedicated teacher, and he is known for his service to others.”

Burrus graciously accepted the honor and said he owed it in large part to Mary Lee, who supported and encouraged him throughout his career.

“I have been lucky, incredibly lucky, to have the good fortune that I have had,” Burrus said. “I came along just when computers, communications and applied mathematics were developing the way they did. I was right in the middle of it.”