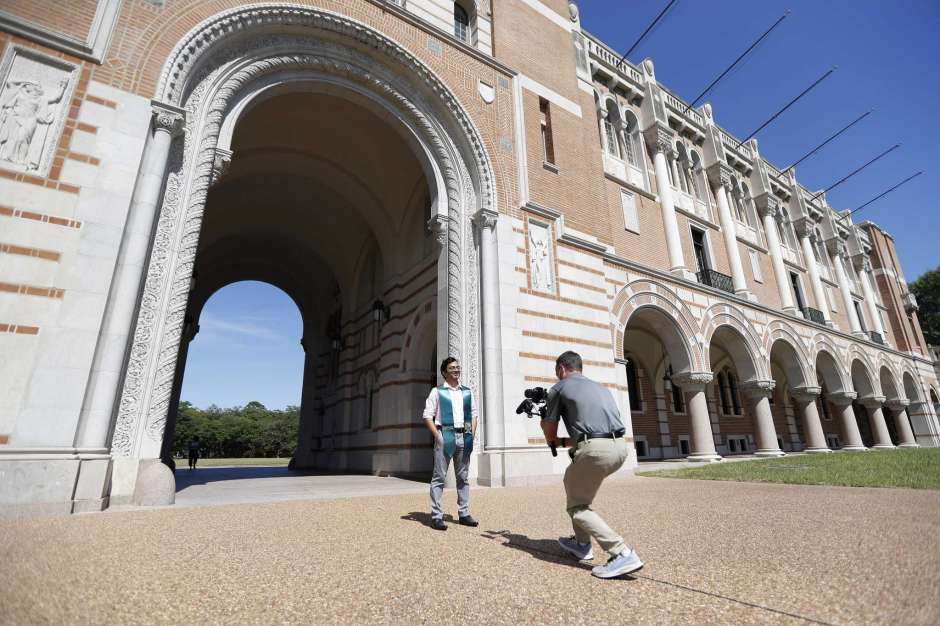 The Robert A. Welch Foundation has donated the money to Rice for a new research hub to engineer new technologies and innovative materials.

The Houston-based foundation has contributed more than $1 billion to chemistry research since the 1950s, and will distribute the funds to Rice over 10 years, allowing the institute to draw upon Rice’s various experts and faculty across disciplines and to recruit top researchers from around the world to focus on advanced materials.

“The advanced materials is a field that doesn’t get a lot of publicity, but no doubt, it’s everywhere,” said Carin Barth, chair and director of the Welch Foundation.

Advanced materials are used in computers, cell phones, medical devices, batteries, and in the sports and the automobile industries, proving vital to everyday life. Materials like metals were paramount during the Iron, Steel and Bronze ages. The semi-conductor was a game-changer, but advanced materials — along with the science and research behind them — are continually evolving, and the institute is looking to accelerate that advancement, Barth said.

“One of the things we’re going to try to do differently is to identify the materials that we want based on the properties as we need them,” Shamoo said. In some cases, discovering or finding materials for certain products or technologies can be time-consuming, so researchers are taking a more proactive approach.

“Rather than discovering, the idea is to use chemistry … to design materials,” Shamoo said.

This means researchers at Welch Institute for Advanced Materials might design materials to conduct heat, to be more flexible or more rigid, or to attract certain molecules with the hope that they can improve quality of life, Barth said. Such new advanced materials could contribute to the development of new energy systems, sustainable water, space systems, telecommunications, manufacturing, transportation, and security, and machine learning and artificial intelligence could help aid the pace of discovery and design.

“If there’s a city to be positioned at the forefront of that, it really is Houston,” said Rice President David Leebron, who like Barth noted as advantages the city’s access to NASA and its budding technology and biotech industries and well-established energy and medical fields.

“The opportunity to advance human capacity and quality of life through advanced materials is vast,” Adam Kuspa, Welch Foundation president said, adding many solid ideas for basic research exist, support and funding for it is lacking. The new institute will be a chance for scientists to experiment, research and attack different problems, he said.

“If you give very smart people the resources to realize their vision and their creativity about what the avenue of the research is, good can things happen. But you can’t plan for it,” said Kuspa. No one can guarantee when discovery of new materials will occur. Investment in research, however, he said, makes advancement more promising, which was the crux of late Houstonian and entrepreneurial founder Robert A. Welch’s vision.

The Welch Foundation, founded with funds from Welch’s trust after his death, has invested in basic research in chemistry and other scientific fields, endowing 48 chairs at 21 Texas universities and supporting renowned researchers.

The new Welch Institute in Rice’s Dell Butcher Hall builds on an existing relationship between Rice and the foundation. Support from the Welch Foundation led to Rice’s discovery of buckminsterfullerene, also known as “buckyballs,” which is a new form of carbon. The discovery laid the foundation for nanotechnology and resulted in Rice being honored Nobel Prize in Chemistry in 1996, according to a university release.

“It’s just an example of what we can achieve in this city when we build these collaborations,” Leebron said.

Overseen by a developing independent board comprised of Rice faculty, members of the Welch foundation, and Houstonians, the institute will conduct a national search for the chair of its scientific advisory board and an executive director. A president is expected to be in place by November. It will also work to collaborate with other colleges within the state, including University of Houston, University of Texas at Austin, and Texas A&M University.

“My hope that it will make a difference in this city,” Barth said.