The Ken Kennedy Institute's July Member of the Month, Jesse Chan, is an Assistant Professor of Computational and Applied Mathematics. 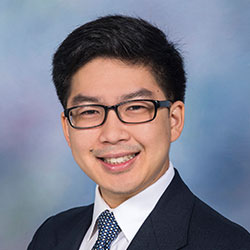 Jesse joined the CAAM Department at Rice in 2016 after spending a year as a postdoctoral researcher in the Department of Mathematics at Virginia Tech in Blacksburg, VA. He was a Pfeiffer postdoctoral instructor at RIce from 2013-2015 and a research assistant at the University of Texas Institute for Computational Engineering and Sciences in Austin, TX. Jesse spent the summer of 2011 as a research assistant at lLos Alamos, NM. He earned an M.A. and Ph.D. from UT Austin in 2013 and a bachelor's degree in computational and applied math from Rice University in 2008.

Probably a toss-up between “The Righteous Mind: Why Good People Are Divided by Politics and Religion” by Jonathan Haidt and “The Structure of Scientific Revolutions” by Thomas Kuhn. The latter has helped me make sense of my own field as I’ve seen it evolve, and the former changed the way I thought about interactions with people more broadly.

My work focuses on figuring out how to make software for simulating various types of fluid flows faster, more accurate, and more reliable.

I think communication has been trickier than I had expected. Coming up with a new idea or generalized framework usually requires changing the language used to describe that idea as well. Coming up with good notation for a new idea has been nearly as important as coming up with the original idea in the first place.

What is a favorite experience with the Ken Kennedy Institute?

I love the lunch talks that the Institute puts on. Not only is it a great social event, but I also was able to learn about faculty research areas that I might not have come across otherwise. I’ve actually served on graduate student committees and co-organized seminar talks with faculty that I wouldn’t have met except through the Ken Kennedy Institute lunch talks.