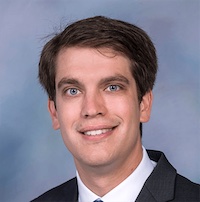 Geoff Wehmeyer and his research group use Rice University’s electron microscopes to deepen understanding of nanoscale heat transfer and improve the performance of products ranging from transistors to light-emitting diodes and heat-assisted magnetic recording devices.

To that end, he has won a National Science Foundation CAREER Award, among the most competitive issued by the agency. The awards are given annually to around 400 young scientists and engineers in support of “early career faculty who have the potential to serve as academic role models in research and education and to lead advances in the mission of their department or organization.”

“The interfaces between materials are a major barrier to thermal management of nanotechnologies,” he said. “Our goal is to probe the small-scale mechanisms of how heat flows across material junctions, which would allow engineers to achieve more efficient device performance.

“By improving our basic understanding of nanoscale heat flow mechanisms across interfaces, engineers could tailor the composition and structure of these interfaces to optimize cooling strategies,” Wehmeyer said. “That could lead to improved device durability and efficiency.”

Currently, engineers find it difficult to evaluate the predictions of various interfacial heat transport theories at the nanoscale, partially because thermal experiments are not able to map temperature at the fine length scales of interest.

The award will also support Wehmeyer’s collaborations with the Rice Office of STEM Engagement and Houston-area community colleges on summer research experiences for students and outreach events that promote career opportunities in nanotechnology and thermal management.

Wehmeyer earned his Ph.D. in mechanical engineering from the University of California, Berkeley, in 2018, and joined the Rice faculty the same year. In 2019, he was one of nine researchers in the U.S. selected to receive NASA’s Early Career Faculty Award from the Space Technologies Mission Directorate. He was also awarded a Sophia Meyer Farb Prize for Teaching by Rice’s Phi Beta Kappa chapter in 2021.