Dautenhahn, Gao, Kyrillidis, Wehmeyer and Yao earn grants, which are among the most competitive and prestigious given by the federal agency. 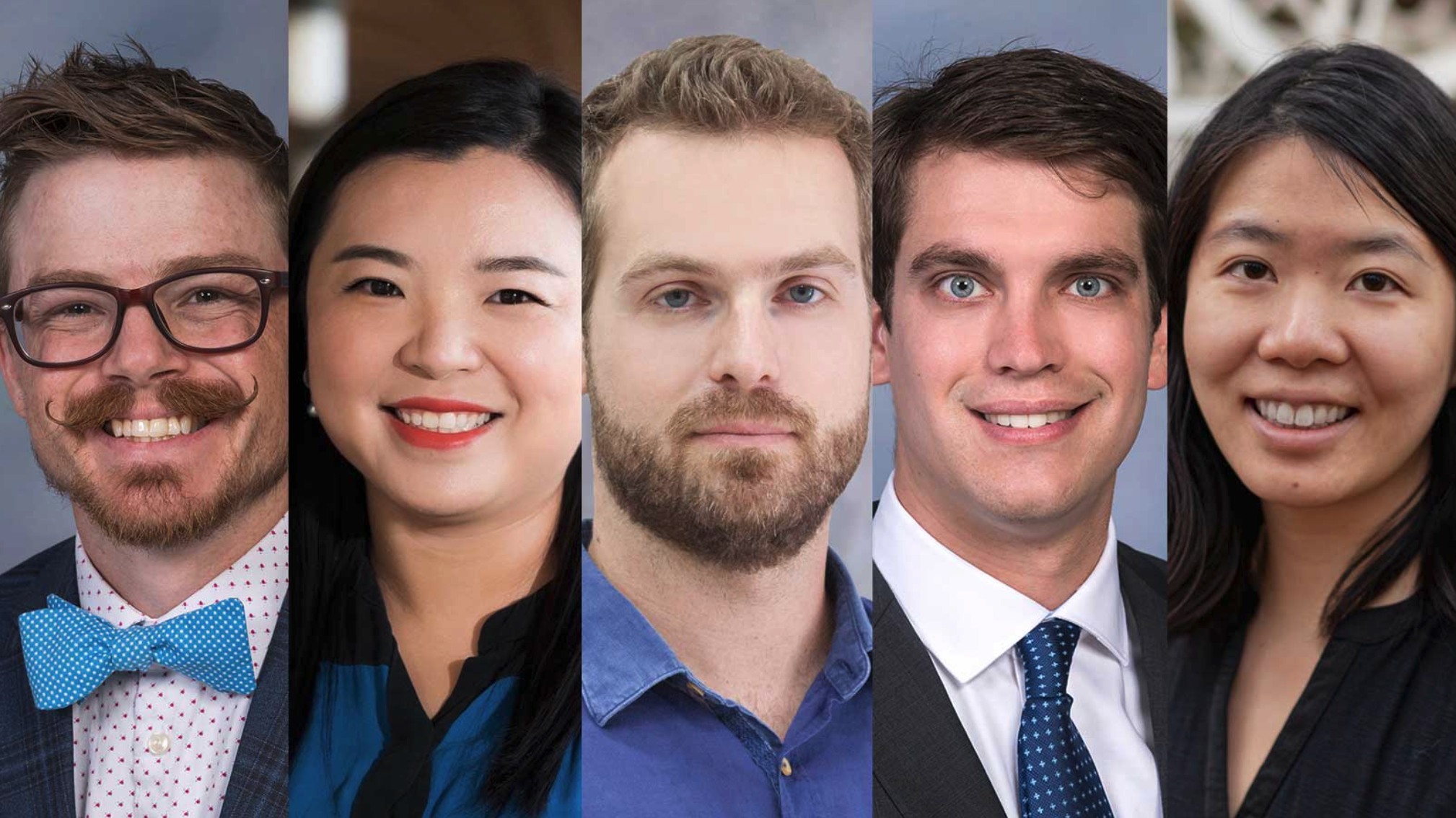 Five young researchers in the George R. Brown School of Engineering are recipients of National Science Foundation CAREER Awards, among the most competitive and prestigious given by the federal agency.

CAREER Awards are given annually to some 400 young scientists and engineers in support of “early career faculty who have the potential to serve as academic role models in research and education and to lead advances in the mission of their department or organization.”

Dautenhahn was awarded a five-year, $630,000 grant to fund his “Least-Authority Virtual Architecture” (LAVA) computer security strategy. He proposes sealing security gaps that would otherwise cost industry and the public billions of dollars. His proposal is titled “Automatically Taming System Complexity with the Least-Authority Virtual Architecture.”

“The challenge with baking security into products by default,” Dautenhahn said, “is that without users there’s no money to invest in security. This ends up forcing bad security practices in exchange for more functionality and users, because if people aren’t using your product, it doesn’t matter how secure it is. You end up having a scenario I call over-privilege, where users and software can access data or information they shouldn’t have.”

Dautenhahn proposes a kind of compartmentalization: “Each component within a computing system should only have access to the resources they need to do the job they’ve been given. We borrow this principle from the military. There it’s known as ‘need to know.’

“The big idea for the grant -- and why it’s a 20-year and not just a five-year project -- is to figure out if we can systematically retrofit least-authority security boundaries into existing products Since we are not going to change the economics of security, is it possible to retrofit security boundaries in to provide meaningful firewalling?”

Dautenhahn earned his Ph.D. in CS from the University of Illinois at Urbana-Champaign in 2018 and joined the Rice faculty that year.

Gao’s grant will help fund her work creating versatile toolkits for controlling gene expression. The ability to turn specific genes on or off at precise times and places in the body. That would enable researchers to study gene functions and treat diseases more effectively. Gao hopes to create tools that grant that level of control and include built-in safety features to prevent genes from being expressed at the wrong places and times.

Gao, who has joint appointments in bioengineering and chemistry, joined the Rice faculty in 2017. She earned her Ph.D. in ChBE from UCLA in 2013.

“The bigger goal or question is ‘Can we control biology or engineer biology to better serve our purposes for treating diseases, for producing biofuels or drugs or other valuable chemicals?’” she said. As an engineer, Gao seeks to combine what she’s learned from the fields of synthetic biology and protein engineering to develop a broadly applicable platform for gene regulation.

Her CAREER research will center on adapting an existing library of small-molecule drugs that have already been developed for precision dosing. Gao and her students will use synthetic biology principles to design more than a dozen systems that use the small molecules to control gene expression in mammals.

“We’re not creating the small-drug library but adapting a large one that’s been developed by many labs for many years,” she said.

The control system is designed to ensure: safety (as gene regulation requires multiple components), tunability (regulation can be dialed up or down by increasing or decreasing drug dosage) and sensitivity (multiple genes can be controlled simultaneously to direct complex cellular behaviors). It will also allow for precision timing of gene activation, as drug dosage can be calculated based on how long the drug remains active in the body.

The design will allow what Gao calls “multiplex control,” meaning complexes can be mixed and matched in ways that allow for controlling complex cellular behavior. The system could be designed to activate a gene only if each of two small-molecule complexes are present or if only one is present.

“If I want to only induce the gene expression in a specific organ, we can just deliver the specific small molecule into that organ so it only gets diffused in the target regions,” she said. “Drug dosage can be used to regulate the magnitude of gene expression and the time and place of expression.”

The system will be first applied for controlled genome editing.

“In this project, we won’t be engineering CRISPR proteins that edit genes, but we’ll be controlling them like we would any other genes,” Gao said. “We want to show we can do this for CRISPR genome editors first because gene editing requires high-precision. It’s extremely important to improve our control of them.”

Kyrillidis, by further exploring the theory and design of non-convex optimization, hopes to devise a technology for faster, more robust algorithms with impacts in many fields. He has been awarded a five-year, $650,000 grant for his research proposal, “Algorithmic foundations for practical acceleration in computational sciences.”

“Given that we lack theory, more often than not, in non-convex optimization,” Kyrillidis said, “researchers often follow trial-and-error procedures, which leads to heuristics. Deciding when heuristics are provable algorithms is a pressing need for the scientific community and society as a whole.”

Kyrillidis’ goal is to devise algorithmic foundations and theory that will accelerate problem solving. This would include the design of fast algorithms as an active research area in machine learning, information processing and optimization research.

Understanding how performance is obtained using efficient algorithms is essential to designing practical and safely applicable learning, he said. His research will focus on three priorities: Faster convergence in structure-rich problems, with emphasis on matrix-factorized machine learning problems; algorithmic acceleration in non-convex scenarios, with a focus on neural network architectures; and acceleration techniques in machine-learning systems.

With his research group, the Nanoscale Heat Transfer Lab, Wehmeyer plans to use Rice’s electron microscopes to deepen understanding of nanoscale heat transfer and improve the performance of products ranging from transistors to light-emitting diodes and heat-assisted magnetic recording devices.

“The interfaces between materials are a major barrier to thermal management of nanotechnologies,” he said. “Our goal is to probe the small-scale mechanisms of how heat flows across material junctions, which would allow engineers to achieve more efficient device performance. That could lead to improved device durability and efficiency.”

Currently, engineers find it difficult to evaluate the predictions of various interfacial heat transport theories at the nanoscale, partially because thermal experiments are not able to map temperature at the fine length scales of interest.

Wehmeyer earned his Ph.D. in MECH from the University of California, Berkeley, in 2018, and joined the Rice faculty the same year.

With her five-year, $790,000 grant, Yao plans to develop machine learning methods and build open-source software to help biomedical researchers analyze DNA methylation, a biological process by which a methyl group is added to a cytosine, one of DNA’s four bases. Such small modifications affect gene expression and show region-specific patterns. Yet they’re dynamic, changing with age and in response to environmental factors such as air quality, diet and exercise.

This interests Yao, who wants to sift through the more than 28 million DNA methylation sites in the genome to find “fingerprints” representative of distinct tissues and cell types and how these translate into essential downstream functions.

“I’m grateful for the NSF award because this is somewhat of a new direction for me,” said Yao, who joined Rice in 2019 with backing from the Cancer Prevention and Research Institute of Texas and has co-authored high-profile papers applying machine learning methods to uncover once-hidden molecular processes responsible for arthritis and neurological disease.

Methylation occurs throughout the body, and gaining a better understanding of this fundamental biological process will help researchers who study development, aging and disease, she said.

“DNA methylation is a natural interface between the environment and what happens on the DNA level, and there can be many downstream effects,” Yao said. “You inherit your DNA from your parents -- your A, C, G and Ts -- and these are fixed aside from mutations which can cause disease. But methylation is a natural way to change or reverse things without adjusting the actual genome.

“It plays such a big role in regulation that it is often referred to as the ‘fifth base of DNA,’” she said. “Methylation clearly can change whether a gene is expressed or not, but it’s also relatively stable. This means we can use it as a biomarker to help orient where we are in the body and, interestingly, begin to pinpoint how environmental stimuli affect our cells.”