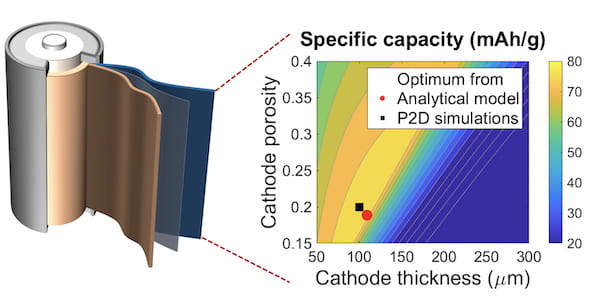 A simpler and more efficient way to predict performance will lead to better batteries, according to Rice University engineers.

That their method is 100,000 times faster than current modeling techniques is a nice bonus.

A graph that maps the capacity of batteries to cathode thickness and porosity shows a laborious search based on numerical simulations (black square) and a new Rice University algorithm (red dot) return nearly the same result. Rice researchers say their calculations are at least 100,000 times faster. Illustration by Fan Wang

The analytical model developed by materials scientist Ming Tang and graduate student Fan Wang of Rice University’s Brown School of Engineering doesn’t require complex numerical simulation to guide the selection and design of battery components and how they interact.

The simplified model developed at Rice — freely accessible online — does the heavy lifting with an accuracy within 10% of more computationally intensive algorithms. Tang said it will allow researchers to quickly evaluate the rate capability of batteries that power the planet.

There was a clear need for the updated model, Tang said.

“Almost everyone who designs and optimizes battery cells uses a well-established approach called P2D (for pseudo-two dimensional) simulations, which are expensive to run,” Tang said. “This especially becomes a problem if you want to optimize battery cells, because they have many variables and parameters that need to be carefully tuned to maximize the performance.

“What motivated this work is our realization that we need a faster, more transparent tool to accelerate the design process, and offer simple, clear insights that are not always easy to obtain from numerical simulations,” he said.

Battery optimization generally involves what the paper calls a “perpetual trade-off” between energy (the amount it can store) and power density (the rate of its release), all of which depends on the materials, their configurations and such internal structures as porosity.

“There are quite a few adjustable parameters associated with the structure that you need to optimize,” Tang said. “Typically, you need to make tens of thousands of calculations and sometimes more to search the parameter space and find the best combination. It’s not impossible, but it takes a really long time.”

He said the Rice model could be easily implemented in such common software as MATLAB and Excel, and even on calculators.

To test the model, the researchers let it search for the optimal porosity and thickness of an electrode in common full- and half-cell batteries. In the process, they discovered that electrodes with “uniform reaction” behavior such as nickel-manganese-cobalt and nickel-cobalt-aluminum oxide are best for applications that require thick electrodes to increase the energy density.

They also found that battery half-cells (with only one electrode) have inherently better rate capability, meaning their performance is not a reliable indicator of how electrodes will perform in the full cells used in commercial batteries.

The study is related to the Tang lab’s attempts at understanding and optimizing the relationship between microstructure and performance of battery electrodes, the topic of several recent papers that showed how defects in cathodes can speed lithium absorption and how lithium cells can be pushed too far in the quest for speed.

Tang is an assistant professor of materials science and nanoengineering. The U.S. Department of Energy supported the research.