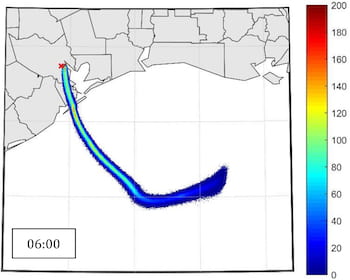 When aboveground storage tanks fail during a storm and their toxic contents spread, the threat to human health can and probably will flow downwind of the immediate area.

Rice University engineers have developed a model to quantify what could happen when a hurricane or other natural disaster causes such damage based on data gathered from the Houston Ship Channel, the largest petrochemical complex in the United States, during and after two hurricanes, Ike in 2008 and Harvey in 2017.

Pollutants like toxic organic chemicals evaporate from spills and can be carried a long way from the site by the wind, depending on the storm’s characteristics.

The computational model, according to atmospheric scientist Rob Griffin of Rice’s Brown School of Engineering, uses real data from the two storms as a proof of concept. The model is available upon request to help researchers predict the “what if” consequences of future storms that threaten storage tanks or chemical spills in general.

“We first had to understand the surge models, and that takes time after a storm,” Griffin said. “This paper combines the hydrology from those storm scenarios with structural fragility models, leading to predicting the atmospheric consequences.”

The study appears in the journal Atmospheric Environment.

The model follows the hypothetical fate of toxins like organic solvents including benzene and tolueneand their reaction products as they drift with the wind for up to 12 hours after a spill, up to about 5,000 feet. The pollutants pose further damage as they evolve into secondary toxins within the downwind plumes, according to the researchers.

The model predicted downwind oil plumes would cover a broader region than organic solvent plumes that would remain concentrated along the path of the prevailing wind, according to the study. It showed substantial formation of ozone and secondary organic aerosols forming in the solvent plumes, depending on other factors like sunlight and background pollutants.

The researchers noted models could provide the only means to estimate the spread of pollutants that threaten the population downwind of a spill if a storm knocks out air quality monitoring systems in its path.

A 2015 study by Rice civil and environmental engineer Jamie Padgett and alumnus Sabarethinam Kameshwar, now an assistant professor of civil and environmental engineering at Louisiana State University, predicted a percentage of storage tanks would fail if a Category 4 or greater hurricane hit the Houston Ship Channel, either lifting them off their foundations, crushing them or penetrating them with debris.

They estimated a 24-foot storm surge could release 90 million gallons or more of oil and hazardous substances.

That study was a jumping-off point for Griffin, Padgett and Phil Bedient, director of Rice’s Severe Storm Prediction, Education and Evacuation from Disasters (SPPEED) Center, along with Hanadi Rifai, a Rice alumna and environmental engineer at the University of Houston, to model how such a spill would spread pollutants through the atmosphere.

“The earlier study predicted the (surface-bound) plume in the ship channel if this spill were to happen,” Griffin said. “It talked about potential exposure to the environment and damage to the channel itself, but as an atmospheric chemist, I thought, that stuff’s not going to just sit there. It’s going to evaporate.”

One model related to conditions during and after Hurricane Ike showed a diesel plume from a single tank spill would expand slowly for the first six hours to cover about 42 square kilometers, but then expand rapidly to cover 500 square kilometers after nine hours. The swirling winds would have kept the plume within Texas, the model shows.

But travel downwind would have been significantly different during Harvey, for which the model showed a narrower and more concentrated plume directed by the wind straight into the Gulf of Mexico.

Models of the fate of evaporated toluene and benzene during Ike showed the plumes tracked with the storm’s eastward path, with levels dangerous to human health most likely at the center of the plume within the first minutes of a tank failure. These would pose a risk to workers and communities near the spill, but the chemicals’ concentrations would decrease rapidly further downwind.

“I don’t think the information about what’s in the tanks is public knowledge, so we had to make some assumptions about what would spill if there were a spill,” Griffin said. “But it’s valuable to think about what would happen to those chemicals once they’re in the atmosphere. The same results could be just as applicable to something like the Deepwater Horizon. Once that material reached the surface of the ocean, what happens to it when it evaporates?

“I would love to see some of the owners of these tanks use this to look at their structures,” he said. “I can imagine folks like the Environmental Defense Fund or other advocates picking up on the study as well.”

Griffin noted the model isn’t set up to allow a company to predict the effects of a single tank failure. “It’s a more general model of a region with tanks that are likely to fail, based on real situations that happened,” he said. “But we can make the chemistry and atmospheric code available. If others want to study a given storm situation and a given leaking tank, some significant legwork would need to go into that.”