In combinations predicted by Rice materials theorist Boris Yakobson and his team, excitons were observed stabilizing at the materials’ ground state. 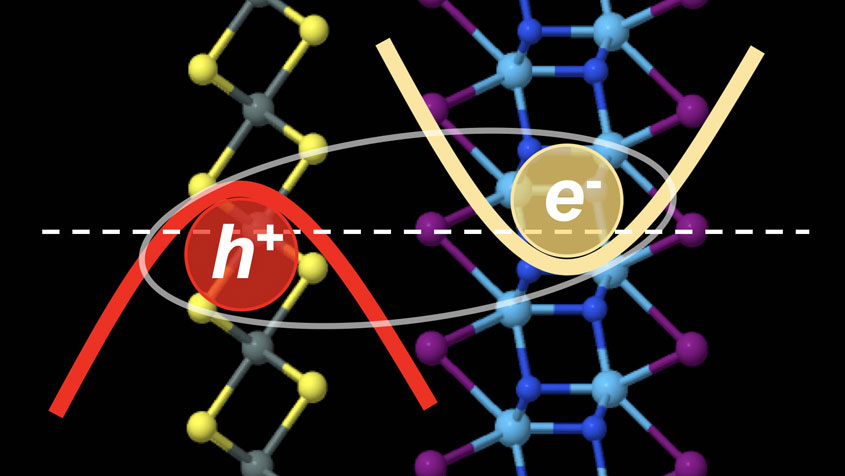 In combinations predicted by Rice materials theorist Boris Yakobson and his team, excitons were observed stabilizing at the materials’ ground state. Mixing and matching computational models of 2D materials led scientists at Rice University to the realization that excitons -- quasiparticles that exist when electrons and holes briefly bind -- can be manipulated in new and useful ways.

The researchers identified a small set of 2D compounds with similar atomic lattice dimensions that, when placed together, would allow excitons to form spontaneously. Generally, excitons happen when energy from light or electricity boosts electrons and holes into a higher state.

But in a few of the combinations predicted by Rice materials theorist Boris Yakobson and his team, excitons were observed stabilizing at the materials’ ground state. According to their determination, these excitons at their lowest energy state could condense into a superfluidlike phase. The discovery shows promise for electronic, spintronic and quantum computing applications.

“The very word ‘exciton’ means that electrons and holes ‘jump up’ into a higher energy,” Yakobson said. “All cold systems sit in their lowest-possible energy states, so no excitons are present. But we found a realization of what seems a paradox as conceived by Nevill Mott 60 years ago: a material system where excitons can form and exist in the ground state.”

After evaluating many thousands of possibilities, the team precisely modeled 23 bilayer heterostructures, their layers loosely held in alignment by weak van der Waals forces, and calculated how their band gaps aligned when placed next to each other. (Band gaps define the distance an electron has to leap to give a material its semiconducting properties. Perfect conductors -- metals or semimetals like graphene -- have no band gap.)

Ultimately, they produced phase diagrams for each combination, maps that allowed them to view which had the best potential for experimental study.

“The best combinations are distinguished by a lattice parameter match and, most importantly, by the special positions of the electronic bands that form a broken gap, also called type III,” Yakobson said.

Conveniently, the most robust combinations may be adjusted by applying stress through tension, curvature or an external electric field, the researchers wrote. That could allow the phase state of the excitons to be tuned to take on the “perfect fluid” properties of a Bose-Einstein condensate or a superconducting BCS condensate.

“Condensate states are intriguing because they possess bizarre quantum properties and exist on an everyday scale, accessible without a microscope, and only low temperature is required,” Kutana added. “Because they are at the lowest possible energy state and because of their quantum nature, condensates cannot lose energy and behave as a perfect frictionless fluid.

“Researchers have been looking to realize them in various solid and gas systems,” he said. “Such systems are very rare, so having two-dimensional materials among them would greatly expand our window into the quantum world and create opportunities for use in new, amazing devices.”

“Except for having similar lattice parameters within each pair, the chemistry compositions appear rather nonintuitive,” Yakobson said. “We saw no way to anticipate the desired behavior without the painstaking quantitative analysis.

“One can never deny a chance to find serendipity -- as Robert Curl said, chemistry is all about getting lucky -- but sifting through hundreds of thousands of material combinations is unrealistic in any lab. Theoretically, however, it can be done.”

Yakobson is the Karl F. Hasselmann Professor of Materials Science and NanoEngineering and a professor of chemistry at Rice.