Enzyme from fungi shows molecules which way to turn 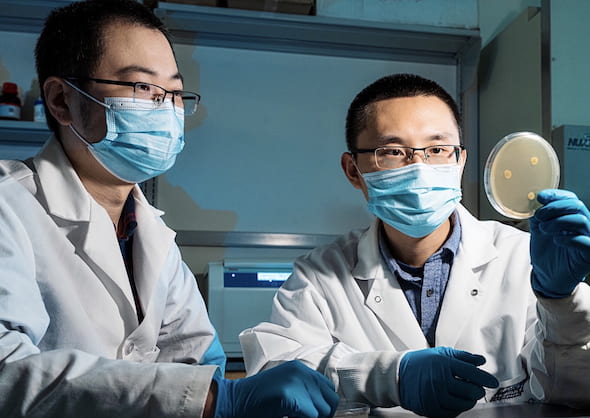 A small fungal enzyme could play a significant role in simplifying the development and manufacture of drugs, according to Rice University scientists.

The Rice lab of chemical and biomolecular engineer Xue Sherry Gao and collaborators isolated a biocatalyst known as CtdE after identifying it as the natural mechanism that controls the chirality — the left- or right-handedness — of compounds produced by the native fungal host.

Two chiral things are, like hands, alike in structure but cannot perfectly overlap. Because the property is important in designing drugs that bind correctly to their targets, the ability to achieve 100% correct chirality is highly desired, Gao said.

“It’s important because if a pharmaceutical drug has the wrong stereochemistry (chirality in three dimensions), it could become a poison to humans, even if the planar chemical structure is the same,” she said.

Like “left” or “right” orientation in chiral objects, what’s known as a 3S or 3R orientation is determined by a molecule’s stereocenter, a one-atom connection between parts of a molecule, Gao said.

But while nature handles the process with ease, selectively synthesizing stereocenters has been a challenge for chemists. The entire mechanism behind nature’s ability to control whether a molecule has a 3S or 3R orientation has been hidden from view until now.

Understanding how it works in fungi and analyzing its structure could give scientists, particularly those who design drugs, a new chemical synthesis tool.

The focus of the study, a bioactive natural product known as 21R-citrinadin A, discovered in 2004 in a marine-derived fungal strain of Penicillium citrinum, is toxic to leukemia in mice and human lung cancer cells.

“21R-citrinadin A is a very complicated molecule, with eight stereocenters,” Gao said. “In a way, the paper emphasizes how nature uses enzymes to synthesize a complex molecule with such a precision. Eight different stereocenters are a lot to control.”

She said the molecule incorporates a “very intriguing” 3S spirooxindole ring. “Nature produces several other chemicals with a similar spirooxindole pharmacophore,” Gao said. “However, we became very curious that some of them contain a 3R spirooxindole ring, the opposite of 3S in citrinadins.

“All the genes responsible for expressing this small molecule are clustered together in these fungi, so first we found the gene cluster and looked at each gene individually to see which one could be the most important to catalyze the specific chemical transformations,” she said.

“Once we find it, we can take that gene outside of the fungus, put it back into a user-friendly host, E. coli, and then use protein purification technology to isolate and test its function in a test tube,” Gao said. “By doing everything outside of the fungus, we can be sure there’s only one enzyme that performs this one function.”

The modified E. coli express CtdE protein in bulk. When subsequently used in chemical transformations, CtdE catalyzed the desired 3S stereoselectivity across the board. “A spirooxindole is hard to synthesize already,” she said. “Our goal was to understand the mechanism of how the enzyme controls this specific 3S stereochemistry.”

Bioinformatic analysis, X-ray crystallography and experiments confirmed that CtdE is solely responsible for catalyzing 3S stereoselectivity, Gao said. (Another enzyme, PhqK, was already known to catalyze 3R orientation.) “Having a set of two enzymes that give precise control over stereochemistry will eventually improve the synthesis in pharmaceutical production,” she said.

Gao noted that because CtdE works at room temperature, it will help keep chemistry “green” as well. “Hopefully, these biocatalysts will catalyze chemical reactions in a more environmentally friendly way,” she said.

Postdoctoral researchers Zhiwen Liu and Fanglong Zhao of Rice and graduate student Boyang Zhao of Baylor College of Medicine are co-lead authors of the paper.

The National Institutes of Health, the Robert A. Welch Foundation, the Innovation Program of the Shanghai Municipals Education Commission and the National Natural Science Foundation of China supported the research.