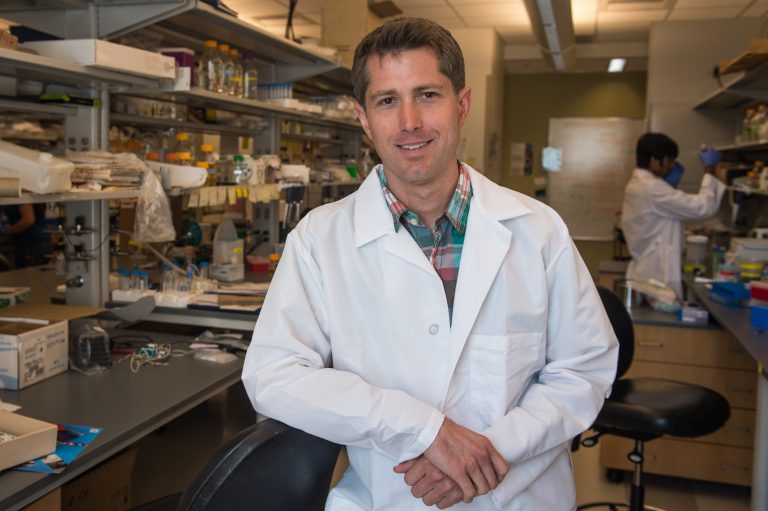 In an important step toward the clinical application of synthetic biology, Rice University researchers have engineered a bacterium with the necessary capabilities for diagnosing a human disease.

The engineered strain of the gut bacteria E. coli senses pH and glows when it encounters acidosis, an acidic condition that often occurs during flareups of inflammatory bowel diseases like colitis, ileitis and Crohn’s disease.

Researchers at the University of Colorado (CU) School of Medicine used the Rice-created organism in a mouse model of Crohn’s disease to show acidosis activates a signature set of genes. The corresponding genetic signature in humans has previously been observed during active inflammation in Crohn’s disease patients. The results are available online in the Proceedings of the National Academy of Sciences.

Study co-author Jeffrey Tabor, whose lab engineered the pH-sensing bacterium, said it could be reprogrammed to make colors that show up in the toilet instead of the fluorescent tags used in the CU School of Medicine experiments.

“We think it could be added to food and programmed to turn toilet water blue to warn patients when a flareup is just beginning,” said Tabor, an associate professor of bioengineering in Rice’s Brown School of Engineering.

Over their 3.5 billion-year history, bacteria have evolved countless specific and sensitive genetic circuits to sense their surroundings. Tabor and colleagues developed a biohacking toolkit that allows them to mix and match the inputs and outputs of these bacterial sensors. The pH-sensing circuit was discovered by Rice Ph.D. student Kathryn Brink in a 2019 demonstration of the plug-and-play toolkit.

PNAS study co-authors Sean Colgan, the director of the CU School of Medicine’s mucosal inflammation program, and Ian Cartwright, a postdoctoral fellow in Colgan’s lab, read about the pH sensor and contacted Tabor to see if it could be adapted for use in a mouse model of Crohn’s disease.

“It turns out that measuring pH within the intestine through noninvasive ways is quite difficult,” said Colgan, the Levine-Kern Professor of Medicine and Immunology in the CU School of Medicine.

So Brink spent a few weeks splicing the necessary sensor circuits into an organism and sent it to Colgan’s lab.

“Normally, the pH in your intestines is around seven, which is neutral, but you get a lot of inflammation in Crohn’s disease, and pH goes to something like three, which is very acidic,” Tabor said.

Colgan and colleagues have studied the genes that are turned on and off under such conditions and “needed a tool to measure pH in the intestine to show that the things they were observing in in vitro experiments were also really happening in a live animal,” Tabor said.

“Colonizing this bacterial strain was the perfect biological tool to monitor acidosis during active inflammation,” Colgan said. “Correlating intestinal gene expression with the bacterial pH sensing bacteria proved to be a useful and valuable set of biomarkers for active inflammation in the intestine.”

Tabor said he believes the pH-sensing bacterium could potentially be advanced for human clinical trials in several years.

Tabor’s work was supported by the Welch Foundation and the National Science Foundation.