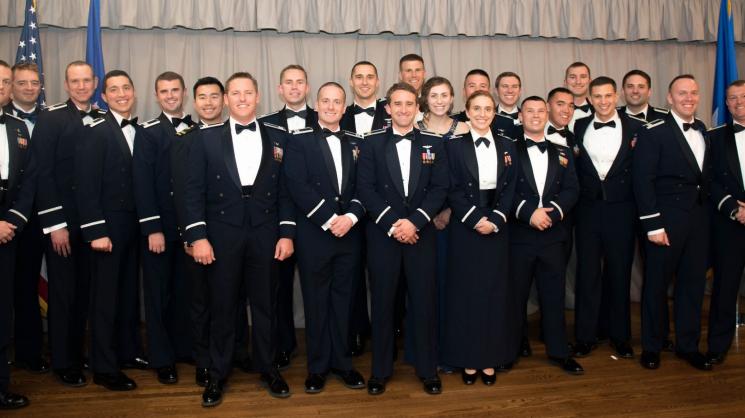 The U.S. Air Force Test Pilot School may be the most elite training program in the world.

That three Rice University alumni are among the 23 women and men to graduate in December is extraordinary. That all three are products of the same Department of Mechanical Engineering research group at Rice — the Team for Advanced Flow Simulation and Modeling — is phenomenal. The Air Force officers — Maj. Samuel Wright ’10, Capt. Darren Montes ’12 and Capt. Ryan Kolesar ’14 — had all earned master’s degrees in the research group led by Tayfun Tezduyar, the James F. Barbour Professor of Mechanical Engineering and a specialist in computational fluid-structure interaction analysis. Each received another Master of Science degree, along with their Test Pilot School Graduate patches, at a Dec. 7 ceremony at Edwards Air Force Base in California. The ceremony is the culmination of a 48-week program that, according to the Air Force, “transforms top operational pilots, navigators and engineers into elite flight test professionals.” An Air Force statement noted graduates “shape the technology and weapon systems of the future for the Air Force, sister services and allied nations.” More than 3,000 have graduated from the program, including 60 astronauts.

While at Rice, the trio made names for themselves as outstanding researchers, according to Tezduyar.

“Their research work was challenging,” he said. “They chose that challenging path. They learned how to work on complex technical problems. Their work made international impact. And now, here they are, where they are.”

At Rice, Wright published seven journal articles indexed by Web of Science, and Montes and Kolesar each published four. Their work encompassed computational analysis of blood flow in cerebral aneurysms and of wind-turbine aerodynamics, and fluid-structure interaction analysis of landing and drogue parachutes for NASA’s Orion spacecraft.

“There is no doubt in my mind that their strong publication record played a role in their selection for the Test Pilot School,” Tezduyar said. “Their success is a testament to the high-quality, master’s-level education and training we are giving, and also a testament to the high quality of the research we are offering to our students,” he said.

While in the Tezduyar lab, all three were co-supervised by another alumnus, Kenji Takizawa, a former postdoctoral researcher and current adjunct professor at Rice and a professor of mechanical engineering at Waseda University in Tokyo.